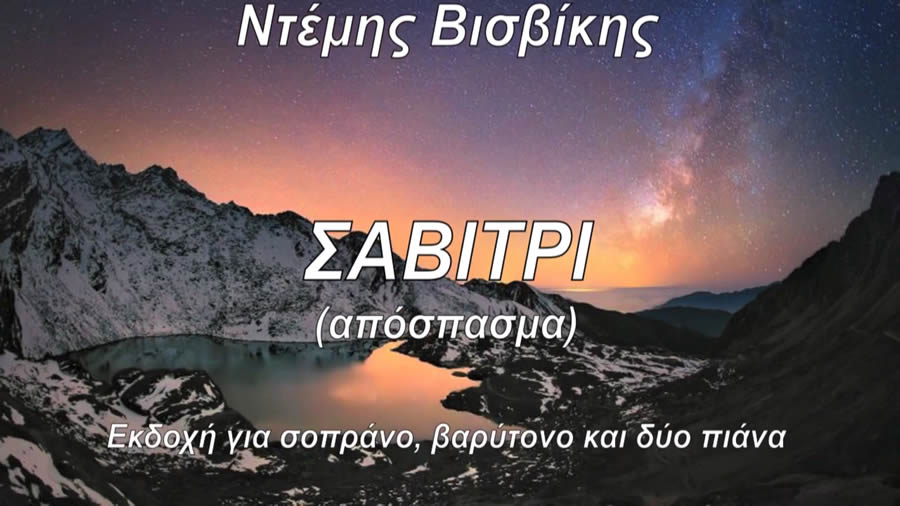 Demis Visvikis in 1996 and 1997, inspired by Savitri, an epic in Twelve Books by the Indian philosopher, poet and writer Sri Aurobindo (1872-1950), composed a work for soprano, baritone and orchestra (or two pianos) giving a melodic texture to an excerpt from the tenth book, “The Double Twilight” – “The Double Twilight”.

Here is how Sri Aurobindo expresses himself for his work:

“The legend of Satyavan and Savitri is presented in the Mahabbarata, the cycle of Vedic mythology, as a story of conjugal love that conquers and wins death. Satyavan is the soul that carries within the divine truth of existence, but descended into the abyss of death and ignorance. Savitri is the Divine Word, the daughter of the Sun, the goddess of supreme truth who descends and is born to save. However, this is not just a metaphor, the characters are not personalized qualities, but incarnations or emissions of living and conscious forces that show man the path that leads from his mortal state to Divine consciousness and immortal life. “

Savitri loves Satyavan and although she has been warned that a year after their marriage Satyavan will die, she chooses to marry him. A year later, Satyavan dies indeed. But Savitri decides to snatch him from death and starts a fight, a long rhetorical battle. Through an expanded painting palette, where the variety of sounds shows the variation of the mental states of the two characters, Demis Visvikis poses this duel in music: a confrontation of Love and Death at the end of which Savitri wins Victory and marks the promise of a New Dawn.

Pianist and composer Demis Visvikis was born in Cairo to Greek parents. At the age of five, the family returns to Greece where a few years later he begins his piano studies at the National Conservatory of Athens. At the age of 18 he settled in Paris where his thirst for exploring the diverse musical tendencies urged him to experiment with various types of written, improvised and aleatoric music.  Feeling the need to elaborate on his findings, he started studying music-writing thoroughly (harmony, counterpoint, fugue, orchestration and composition) from 1974 until 1980 under the supervision of M. Julien Falk, composer and teacher at the main National Academy of Music in Paris (Conservatoire National Supérieur de Musique de Paris), he also studied conducting with M. Georges Tzipine and perfected his piano playing technique with Mrs Jeannine Lacour, Michelle Boegner et Eliane Richepin.

Since 1976, Demis Visvikis has compiled a rich catalog of piano, chamber music and orchestra works. Concerts with his works have also been given in many European countries, the United States and Canada.  In January 2014, he received the Regional, Departmental and Communal Medal of Honor of the French Republic in recognition of his artistic and pedagogical contribution.