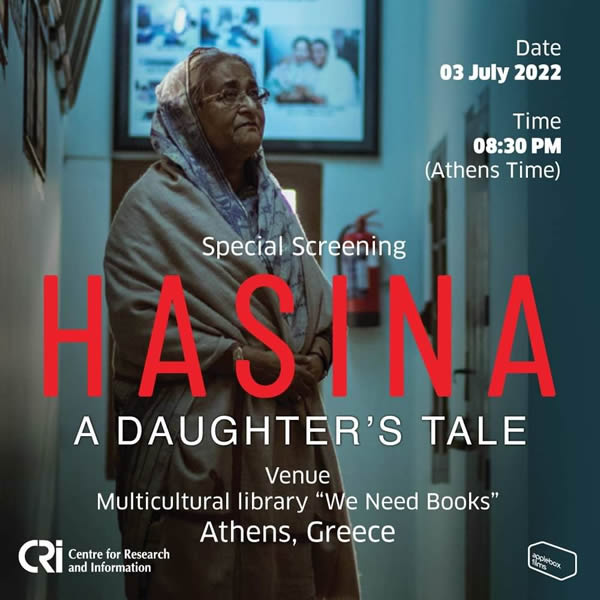 The Embassy of Bangladesh in Greece organised a public screening of the documentary film titled “Hasina: A Daughter’s Tale” at the multilingual library “We Need Books” (7 Evias St., Kypseli) in Athens on Sunday, 03 July 2022 at 8:30 pm.

H.E. Ambassador Mr. Ashud Ahmed gave a brief introduction to the film and welcomed the audience, which consisted of several members of the Bangladeshi community and friends of Bangladesh. in Greece. At the end of the screening, the President of ELINEPA Prof. Dimitrios Vassiliadis, the Second Secretary of the Embassy of India in Greece Mr. Rajendran Jamykannu, the President of Bangladeshi Community in Greece Mr. Abdul Quddus, and the Director of the Multilingual Library Ms. Ioanna Nissiriou commented on the film and praised Hasina’s courageous personality, which was fully dedicated in the continuation of her father’s democratic and secular values.

A few words about the Documentary

The documentary starts off with the narration of Sheikh Rehana, the only living sibling of Sheikh Hasina who survived the 1975 mass murder of the entire family with her. The docudrama mostly shares very personal memories of the two sisters. The film progresses to show Sheikh Hasina and Sheikh Rehana’s accounts from their simple life, back in Gopalganj’s Tungipara to the difficulties they faced in Europe during the aftermath of the assassination of her father and family. This is followed by intimate detail of her return to Bangladesh in the 80s, her fight for democracy during Ershad’s presidency, her loss in the 1991 polls, constantly put under house arrest afterwards, her children sent away to boarding schools abroad for the sake of their education and security as well as the several assassination attempts on her life. The prime minister herself appears in interspersed segments, often adding to the stories.

‘Hasina-A Daughter’s Tale’ overall is not a story of Prime Minister Sheikh Hasina and her political career, rather it is a documentary on Bangabandhu’s daughter Sheikh Hasina. It demonstrates a heartrending biopic of what the title of the film portrays, which is a fascinating account of a daughter’s perspective how the country’s darkest hours had changed her life forever. In the documentary, a daughter recalls rare memories and insights on the relationship with her father. The film, “In her own words, presents her transformation from a woman with a carefree, simple childhood changed into a leader determined to seek justice against those who conspired to assassinate her 20 family members. The film is dedicated to Renu, the nickname of Sheikh Hasina’s mother Sheikh Fazilatunnesa Mujib, who is also an important character of the two sisters’ recollection in the film.

Produced by Radwan Mujib Siddiq and Nasrul Hamid on behalf of the Centre for Research and Information (CRI), the film was directed by Applebox Films founder Rezaur Rahman Khan Piplu, with Sadik Ahmed as cinematographer, Navnita Sen as editor, and Debojyoti Mishra as music director.