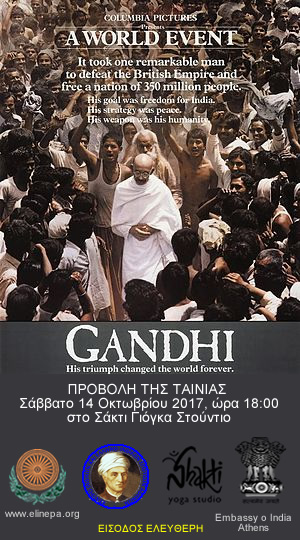 On the occasion of the celebration of the 148th anniversary of the birth of Mahatma Gandhi (October 2, 1869), the Hellenic-Indian Society for Culture and Development, the Athens Center for Indian and Indo-Hellenic Studies, and the Shakti Yoga Studio are organizing a special event with the screening of Richard Attenborough’s award-winning film “Gandhi”

Indologist Prof. Dimitris Vasiliadis will give an introductory speechFree entrance

With the kind support of the Embassy of India in Athens

Gandhi is an epic biographical drama on the life of Mahatma Gandhi, the leader of the non-violent movement for India’s independence from the British occupation. The film was directed by Richard Attenborough, and Ben Kingsley was starring in the homonymous role.

The film was released in 1982 and screened in Greece in 1983, making Gandhi’s life known to the wider audience. The film has won 8 Oscars and many other international awards.

See the trailer of the movie below with Greek subtitles