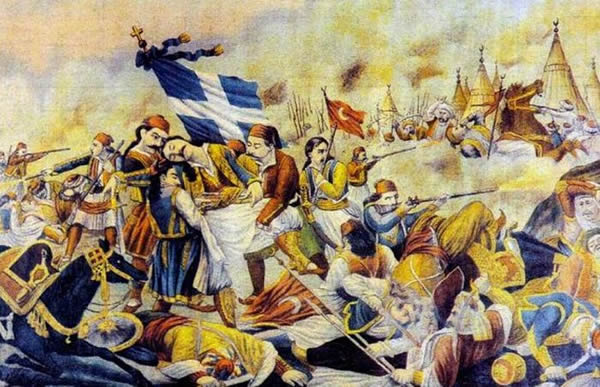 An article by Dr. Dimitrios Vassiliadis on the occasion of the Painting Exhibition organized in New Delhi for the Greek Revolution of 1821.

As part of the celebrations for the 200th anniversary of the Greek Revolution (1821-2021), the Hellenic-Indian Society for Culture and Development (ELINEPA) in collaboration with the Indian Council for Cultural Relations and the Greek Embassy in New Delhi is organizing a group painting exhibition in the capital of India to honor the memory of the heroes who fought for the Freedom and Independence of Greece from the Ottoman yoke in 1821. The event is held under the auspices and with the support of the “Greece 2021” Committee and the Indian Council for Cultural Relations.

The inspirer of the whole event is Ms. Yvonne Alexandridou, Honorary Member of ELINEPA and former Honorary Consul of India in Thessaloniki, who despite the adverse conditions of the pandemic, traveled repeatedly between India and Greece for its successful completion.

The exhibition features four contemporary Greek painters – Claire Tsalouchidis-Hadziminas, Froso Vizovitou, Lazaros Pandos and Pavlos Samios – whose works were inspired by the Greek Revolution of 1821. Unfortunately, Pavlos Samios passed away a few months before the exhibition in India, which he wanted to attend, but great artists continue to live through their works.

Besides the painting exhibition, art workshops with participation of the Greek artists will be held in New Delhi and Chandigarh, while historian Zafeiroula Kagkalidou will give speeches on the Greek Revolution of 1821.

The objective of the exhibition and the cultural events is to promote a better understanding of the 1821 Revolution, its global importance, its influence on the liberation movements in other countries and the way it was affected by the patriotic ideals which became predominant in Europe in the 19th century.

In the light of this understanding, we must mention the great interest in the Greek Revolution shown by the Philhellene Indian scholars of the time, who expressed their own hopes and agony for Independence in their works and poetry. Khettro Mohun Mookerjea is the first Indian to write the History of Greece in the Bengali language, which he published under the title “গ্রীক দেশের ইতিহাস” (Greek Desher Itihas) in 1833, a few years after the declaration of the Greek Independence.[1]

Another Bengali philhellene educator and poet and, perhaps, one of the earliest patriotic poets of modern India, Henry Louis Vivian Derozio praised the struggle of the Greeks for Freedom through a series of poems. His epic poem “Address to the Greeks” was written in January 1826, when the War of Independence against the Ottoman Turks was at its peak. His emotional connection with Greece and India has a special place in his work, as both countries struggled at the same time for their independence from the foreign yoke.[2]

The contribution of the Greek community, which flourished for almost three centuries in Bengal, is also remarkable. The Greek merchants in India did not forget their relatives in Greece, who revolted against the Ottoman rule. Their constant contribution to the liberation struggle can be seen in the famous oath taken in the year of 1802:  «…We shall place in custody in Kolkata our spare money and gold and silver and other property for the resurgence of the race of the Greeks.  No one will ever put a hand on them. They will be bestowed to the kingdom of the Greeks so that with the grace of God it will be resurrected.»[3]

The struggle for Freedom and the belief in common ideals make modern Greeks and Indians natural allies. An alliance that continued during the First and Second World Wars with the participation of Indian soldiers on the side of the allied forces in the battles for the defense of the territorial integrity of Greece.[4]

As the national poet of India, Rabindranath Tagore, stated in his speech during his visit in Athens in 1926: “Both young Greeks and Indians always have to struggle to live on the level of our glorious past. Yet it is not enough to ponder on the past only, we have to live in the modern reality. We have to create the works which will make us immortal like our ancestors.” [5]

I hope that this exhibition dedicated to the Greek Revolution of 1821 will inspire young scholars and artists in India to deepen their work on the glorious path that leads to the light of Freedom, a value that has always been fundamental to both Indian and Greek Culture and Civilization.

[1]. Dutta, Priyadarshi: “‘Greek Desher Itihas’ the first book on Greek history to be written in any Indian language”, INDIKA 2018, https://elinepa.org/greek-desher-itihas/