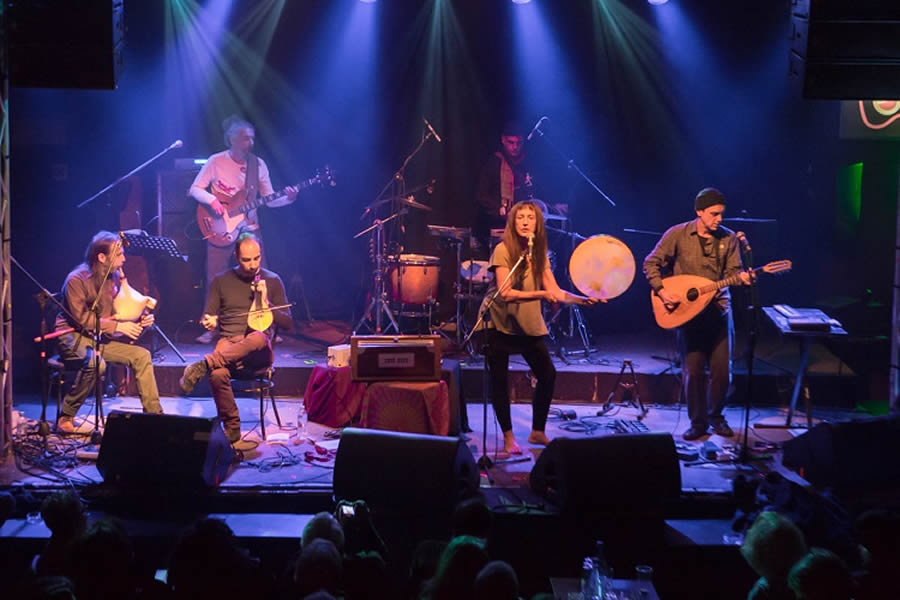 Along the old cobbled roads and footpaths of the mountainous Balkan Peninsula, in and out the deep rocky ravines and valleys of the Epirus, Thrace and Macedonian provinces in the North of Greece, the bleats of sheep and goats echoing against the mountainsides, together with the distant jingles of their well-tuned metal bells, create a most mesmerizing, natural sound ambience. This is the permanent soundtrack music that is heard in most such mountainous, rural areas.

If you listen to the hair-raising polyphonic choruses of Epirus, or the Bulgarian women’s choruses singing their local folk songs, you cannot but feel, that this is exactly what locals reproduce in their music, their folk songs and also their vocal techniques.

Shepherds are often using that technique which produces a high pitch, loud and harsh, nasal voice, so much resembling to the bleats of sheep and goats. You cannot but shout in this manner, if you need your voice to reach the other shepherds or maybe any lost goats to the opposite mountainside.

It’s like the shrill voices of mothers in faraway villages, when they want to collect their children from the open countryside, back home for dinner.

Further than the voice color, one can easily recognize that the musical structure of these polyphonic choirs resembles very much to the sum of bleats, sighs and cries of herds, heard in those areas since millenniums.

Many philosophers along the centuries speak of Art as an Imitation (Mimesis) of Nature. It is true that any Work of Art cannot but reflect the inner world and the ambiance around the artist who created it.

It is therefore commonly said that we can travel the world through its songs and its music. It is true, that the music and the vocal techniques used in different areas of the world can give a lot of info about the climate, the landscape, the social conditions and many more characteristics of each different geographical spot on our planet.

As a child, I was spending all my summer vacations in my father’s hometown, Kalamata, a beautiful Mediterranean town-port in southern Peloponnesus, at the most southern edge of the European mainland, facing the Mediterranean.

Radio waves are easily transmitted over the sea. So this old analogue radio receiver, with which my elder brother was playing all night through in our children room, kept bringing to our ears all kinds of peculiar languages, songs and music from the countries around the Mediterranean and mainly from the northern African coastline.

Our imagination was flying to the dusty cities of Egypt, Algeria, Tunis and Morocco, to the camel caravans crossing the Sahara, exactly like we had seen them in the “Lawrence of Arabia” film, played at that open air cinema theater in the central square of Kalamata.

This fascination led my brother to start learning Arabian.  I very much enjoyed listening to him when he was trying to pronounce the Arabic letters and learn the words. Then I was imitating him, to make the two of us laugh.

Eventually, I started singing on top of the Arab songs coming out of that radio and trying to imitate those throaty, harsh and dusty, low tone voices.

I almost felt the sandy wind of the desert, blowing against my face. And all kinds of questions and speculations about different voice colors, different languages and different styles of music started bothering my mind.

Those slow, long, lazy and painful solo improvisations, they are for sure reflecting the wide landscape and the harshness of the desert. The rhythm of the songs is certainly following the pace of the steps of a camel.

The heavy pronunciation of vowels and syllables and the low pitch of the voice seem like a way to prevent the sand and the dust of the atmosphere from entering the mouth and throat. In a dry and dusty environment the human voice cannot but be hoarse and throaty.

Let us think of an opposite example. Let us listen to one of Shakespeare’s sonnets on a melody of an unknown composer of those times, inspired, born and sung in a northern, rainy country:

It all sounds more “liquid” here… The words, the meanings, the color of the voice, the way the song goes. Constant rain and cold weather bring a different kind of melancholy. Such songs bring to the mind the image of a pale lady or of a teenage boy playing his medieval lute under the whipping leaves of a willow tree by a river.

No need to protect the throat when singing in this climatic environment. The atmosphere is clean and cool and humidity helps the phonetic chords stay wet and flexible.

The human voice is crystal clear and can easily sing on a high pitch. The palate of the mouth takes the shape of the tall, green tree-picks or that of the spire of a Christian Cathedral and each note sounds like a drop of falling rain.

If you like to mentally travel to the area and the era of Shakespeare, just listen to, or sing any of these renaissance songs.

You may feel the smell of the trembling leaves of the “Willow, Willow, Willow” right in your nostrils. You may hear the river flowing under your feet, spreading around its crystal water sounds.

There can be many more examples…

Like of that huge polyrhythmic noise produced by the millions of bird jerks, croaks, quacks and all kinds of exotic bird voices in the jungles of Latin America or of central Africa, which leads directly to the rich polyrhythmic percussion tradition developed in all such areas of the world.

Famous percussionists performing in the open air stages of world music festivals, or groups of youngsters playing their djembes in parks and beaches, they all keep reproducing exactly that sound-scape. They have probably never heard the natural source of this percussion tradition. But this human reproduction of the jungle sound makes city people stand up and dance tribal dances and forget the hours spent on office-chairs, inside huge skyscrapers.

I was recently experimenting on the overtone throat singing technique used by the shamans in Mongolia and in Tuva. It is that vocal technique with which two or more harmonic voices are produced simultaneously by one same person.

I read somewhere that this vocal technique, developed by shamanic healers wandering around the steppes and the mountains of central Asia, is supposed to be an imitation of the various natural phenomena that they meet on their way, like for example the rich sound of a waterfall.

Overtone singing was traditionally not allowed to women. I was wondering whether the reason for this prohibition was social or a reason of hygiene, having to do with the probably dangerous diaphragmatic pressure to the womb while in early pregnancy. So curiosity made me want to explore this vocal technique.

Result? The technique, which produces low, throaty, harmonic drowns made me almost lose my voice for two days.

But the other throat singing style named sygyt, which produces that whistling, a thin second voice on top of the main one, gently massaged my brain with its subtle vibrations and made me feel like as if a friendly spirit had visited my mind to heal it from all its garbage.

Best company to any lonesome shaman, riding his horse for days across the vast Siberian steppes.

Last but not least, I would like to mention and praise the beautiful island songs of the Aegean.

Their characteristic rhythmical syncopation, which sounds like a slight interruption in the natural flow of the dancing rhythm, is clearly imitating the up and down movement of the cruising of a kaiki vessel, periodically interrupted by the medium sized sea waves.

The grace of this kind of rhythm and circular dance reminds us of the grace of a friendly sea, the Aegean, with its medium waves and its playful foam laces.

As for the quality of those thin, extremely flexible and kind of shy island women’s voices, decorated with all kinds of peculiar vocal ornaments, they so much resemble to the voices and the manners of women singers of India.

They are both expressing a similar kind of social shyness, which reflects the conservative societies, in which women were for centuries obliged to be following strict patterns of behavior

The rich vocal ornaments used reflect also the strong female coquetry and a kind of a common taste in clothing, in jewelry, in decoration, even in cooking, with all kinds of spices used, common in India, in the Asia Minor coastline and in the Aegean islands right opposite to it.

These small and curly vocal tricks bring to my mind the colorful paisley patterns, so characteristic of Indian fabrics.

And what is the kind of music produced today in the cities of our technically advanced, “civilized” world?

Music that was born in the 20th century couldn’t but imitate the industrial, metal sounds of factories, large tracks, trains, or the engine of airplanes when taking off.

This was replaced by the mainstream pop music of the 21st century, which consists of all kinds of ring tone sounds, repeatedly clinging on top of minimal electronic loops. The singing voices are often technically distorted, to remind of the announcements coming out of speakers in public places.

It is exactly what is heard everywhere around: from the soft and comfortable seats of quiet train wagons, taking silent people to their job every morning, to the crowded city streets, filled with people holding their mobiles in front of their faces while walking, or to the cute coffee shops, where youngsters meet around a table to chat, but go on chatting with each other through their smart phones.

In the concerts of my early years, before the release of my albums, I used to present compilation programs of folk songs from different areas of the world, “traveling” together with my audience to all these mesmerizing places.

Then later, the songs we wrote together with Stathis Kalyviotis gave us the chance to travel the world in real.

Few days ago a lady I met in the streets of Athens, reminded me of those early concerts and told me how much she and her friends were enjoying the stories I was narrating in between the songs.

This made me sit down and write this text. To keep those stories alive and maybe make my readers enjoy them also.