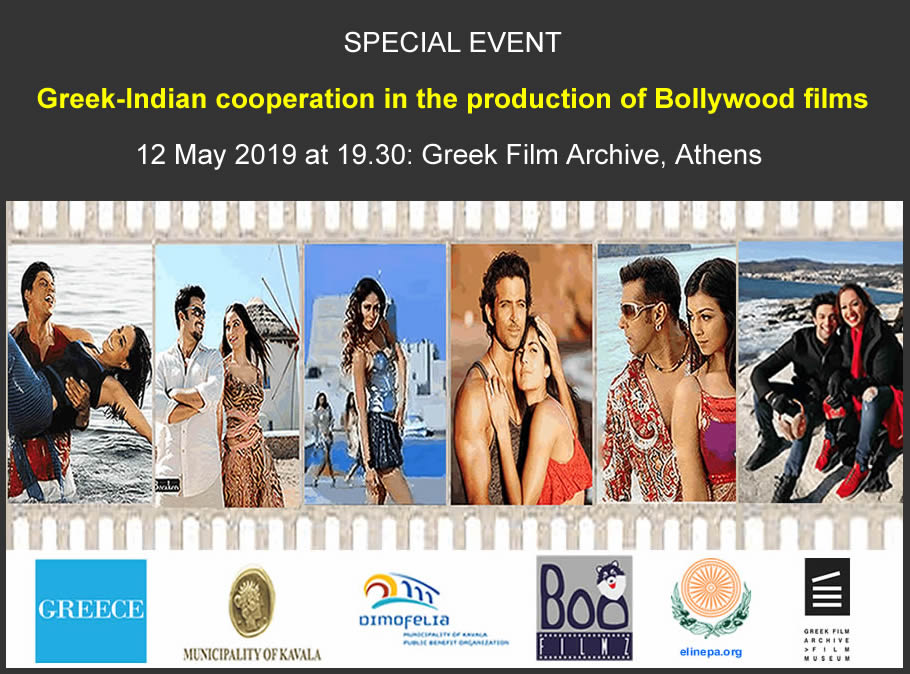 Scroll down for photos

The Hellenic-Indian Society for Culture and Development (ELINEPA) and the Indian film productions company Boo Filmz in collaboration with the municipal enterprise of Kavala “DIMOPHELIA” and the Greek Film Archive organized a special event on “Greek-Indian cooperation in the production of Bollywood films,” which took place on

The event was held under the auspices of the Greek National Tourism Organization and the Municipality of Kavala.

The event was attended by filmmaker and actor from Bollywood Kashmira Shah, the President of ELINEPA Dr. Dimitrios Vassiliadis, the President of DIMOFELEIA Mrs. Anastasia Iosifidou, the Director of the Bollywood dance school in Kavala Kaly Stasinou, and many Greek Film producers, distributors, critics, and journalists.

The Secretary-General of the Greek National Tourism Organization, Mr. Konstantinos Tsegas, and the Ambassador of India to Greece Mrs. Shamma Jain honored the event with their presence. Mr. Tsegas thanked the producers for the choice of our country and referred to the importance that the Greek State gives for the attraction of film productions from abroad. The Ambassador of India highlighted the contribution of the film in the development of Greek-Indian relations and invited the Indian producers to participate in the Thessaloniki International Fair where India is the honored country this year.

The purpose of the event was to develop collaboration in production of Bollywood films and musical video-clips in Greece and to get acquainted with Greek producers and entrepreneurs who want to invest in the Bollywood movie industry in Greece and India.

After the discussion, the first pan-European screening of the comedy “Marne bhi do yaaron” (126 min. language Hindi with Greek subtitles) followed. This is the first Indian film most part of which was shot in Greece (Kavala and Thassos)

We hope that this event will contribute to the further development of Greek-Indian cinematographic collaborations and the strengthening of friendly relations between the two countries.