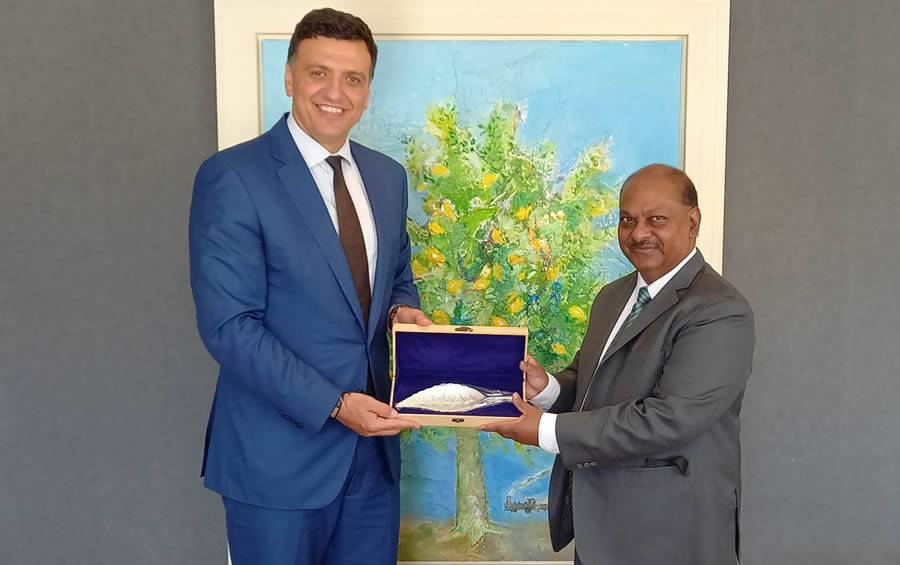 A highly constructive and targeted meeting took place on June 17, 2022, between the Minister of Tourism, Vassilis Kikilias and the Ambassador of India to Greece, Amrit Lugun.

The two sides expressed their deep satisfaction with the recent steps taken to normalize the visa process in India, which was achieved thanks to the decisions taken by the Minister of Foreign Affairs, Nikos Dendias, in coordination with the Minister of Tourism, Vassilis Kikilias.

Mr. Kikilias underlined the strong historical and cultural ties that have connected the two peoples over time, a fact which -as he mentioned- reflects the interest for further strengthening of the bilateral cooperation in the field of tourism. In this context, further cooperation in the audiovisual and film industry was introduced, as well as the strengthening of wedding and gastronomic tourism.

For his part, the Ambassador of India underlined the possibility that now opens for direct flights from India to Greece, after the ratification by the two Parliaments of the signing of the agreement for the provision of air services between the two countries. In particular, reference was made to the possibility of connecting six cities on both sides by direct flights, based on the provisions of the relevant agreement.

Ambassador met with Greek Tourism Minister @Vkikilias today, during which matters of bilateral concern, including normalisation of visa service by Greek Embassy in Delhi, cooperation in audiovisual & film industry, tourism and possibility of direct air connection were discussed. pic.twitter.com/1b3JWlkoh0

Read also:
Greece strengthens its Embassy in New Delhi to deal with the sharp increase in applications for tourism, INDIKA 2022