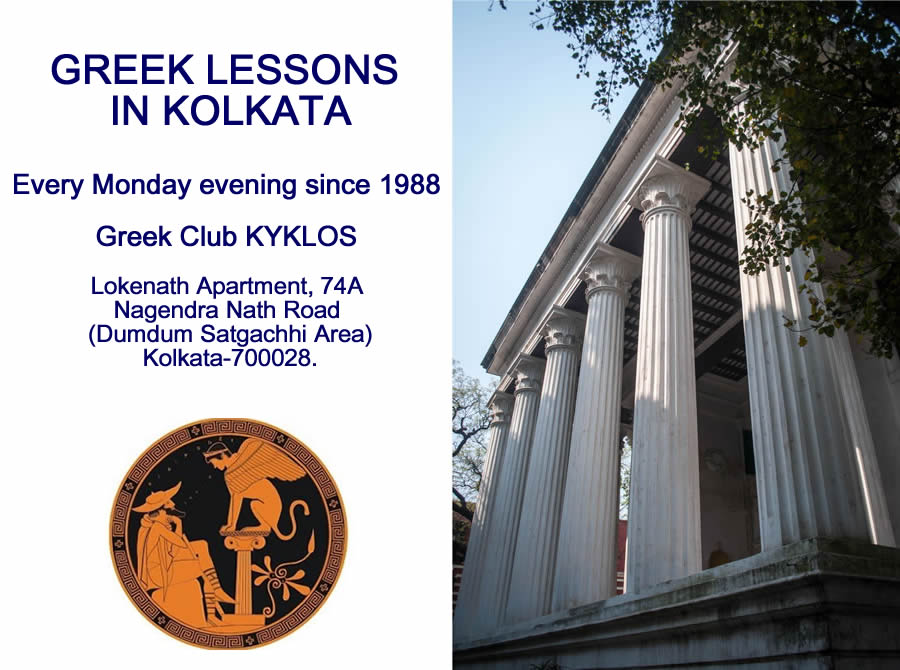 Our relations with Greek culture are very old indeed. Our Greek connection began most probably after Alexander’s invasion of India in 327 B.C. It is common knowledge that the Gandhara School of Art is one of the outcomes of that connection. Our acquaintance with the Greek language started, no doubt, at that time. In our High School days, we came to learn from the Bengali Grammar by Dr. Suniti K. Chatterjee (1890-1970), the renowned linguist, that the Bengali word ‘dam’ in the sense of value or price is derived from the Greek word ‘drachma’. Similarly, the Sanskrit word ‘hora’ (as a unit of time) is basically a Greek word.

Another good result of this contact is Megasthenes’ Indika which is the oldest treatise on India by any foreigner. This small book contains much valuable information on our ancient history, especially the eastern part of India.

However there is no gainsaying the fact that this connection with Greek culture was not very deep-rooted, nor was it’s influence very lasting. Had it been so, this contact with such an ancient and surprisingly developed culture would have been beneficial to our culture. But that connection was cut off nearly two thousand years ago. Much later, after the Muslim invasion in India studies of Greek philosophy and science through Arabic translations were prevalent in the Madrasas (Muslim traditional schools) although they had little bearing on the commonalty.

The second phase of our Greek connection began after the arrival of the British in this country. It is said that Raja Ram Μohan Roy (1772-1833) the leader of the 19th-century Bengali Renaissance, a great social reformer learned Hebrew and Greek. If it is true, then he is the first man with a knowledge of Greek in modern India. But even if Rammohan had learned Greek he did it to read the Bible in original as preparation for polemics against the Christian clergymen or preachers, not to appreciate the Greek literature. The first appreciative reader and admirer of Greek literature was Michael Madhusudan Dutt (1824-1873). He had to leave Hindu College for embracing Christianity. It was a blessing in disguise for him. For he was then compelled to take admission to the Bishop’s College where he got the opportunity of learning Greek and Latin. He not only studied Homer’s epics or Aristotle’s Poetics but also composed Meghnadbadh Kavya (The epic on the Assassination of Meghnad, the son of Ravana of the epic Ramayana) after the Greek model. His Hector Badh (Assassination of Hector) is a direct outcome of his reading of the Iliad. After Madhusudan, quite a number of Bengalees studied Greek. Aurobindo Ghosh, his brother the poet Manmohan Ghosh and the polyglot Harinath De are the most distinguished among them. But we could not benefit from their studies. The study of Greek was confined exclusively among a few academics.

However, Greek history and philosophy were always a part of our curriculum and recently classical Greek literature through English translation has been introduced in many universities. Poetics is almost a compulsory text for postgraduate students of English literature. But the funny thing is this that there is no opportunity of learning Greek here, although one can learn here Chinese or Spanish. Any educated person, today, is familiar with such names as Homer, Sophocles, Socrates, Plato, Aristotle, Ptolemy, Herodotus, and Thucydides. Even a schoolboy knows the names of Magasthenes, Pythagoras, Archimedes, Euclid, and Aristotle; because he has to know what Megasthenes said about India and he has to learn Pythagoras’ theorem and Archimedes’ law. And it is impossible to study logic ignoring Aristotle, the father of deductive logic. Long ago Vidyasagar (1820-1891) translated Aesop’s Fables which delighted as well as educated the children of Bengal. Even in recent times, we have seen Raja Oidipous (King Oedipus) be enacted on a Calcutta stage. But strangely enough, it has never occurred to us that we may read in original what these great authors have written. Perhaps the prolonged foreign rule is responsible for that too. English translation of Greek authors being easily available, we were not interested in learning the original language. As a result, we have to content ourselves with second-hand knowledge of Greek literature. But it must be admitted that no civilized country can do without the Greek language. Students of higher classes have to learn the letter π, while studying about the circumference of a circle; they have to learn the letter θ, while studying Trigonometry; Similarly, they have to learn α β γ and other letters in different contexts. The letter Σ is indispensable to the students of statistics. Gamma rays have been named after the third letter of the Greek alphabet and the world-famous Omega watch has the last one as its name. If we know that the first two Greek letters are α β, then we have no difficulty to understand why letters are called alphabet in English.

Unfortunately, today no Indian is considered to be properly educated unless he has some knowledge of English. To acquire a working knowledge of English we devote most of our energy, effort and time to it in our early life. That language itself is not a little indebted to Greek. Any book on English philology or any etymological English dictionary will amply prove this fact. Such widely used English words as Idea, Genesis, Criterion, Climax, Crisis, Analysis, Synopsis, Basis, Diagnosis, Coma, Drama, Tragedy, Comedy, Character, Orchestra, Chorus, Echo, Scene, Cinema, Telephone, Television, Psyche and many more have been borrowed from Greek. Some of them have come directly from Greek, some have come through some other languages. Some have retained their original forms, some have undergone a little change. Hence the study of Greek will enhance our knowledge and understanding of the English language and literature.

By and large, we see that whether for the sake of knowledge or for some other reasons, willy nilly the whole world has had to be indebted to the Greeks. So we may conclude that the study of the Greek language and culture is neither irrelevant nor an unnecessary pursuit for us.
——

* Aniruddha Bhattacharya was born in Barisal (now in Bangladesh), 71 years ago. He learned his first lessons under the tutelage of his grandfather who introduced among other things, the Bible and Shakespeare to him. Graduated from the Scottish Church College, Calcutta. Studied English literature at Calcutta University. Taught at a higher secondary school in a suburb of Calcutta and retired in 2009. He writes occasionally articles in several magazines.