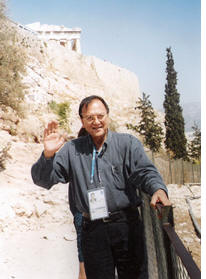 Along with the 70-odd members of the Indian athletic team to the Athens Olympics was the then Minister for Sports and Youth Affairs, Mr. Sunil Dutt. who seems to have had many fans  in Greece as well. He became popular as a charismatic hero of the Indian cinema in the ‘60s. He was immortalised as one of the central figures in Mehboob Khan’s international classic of Hindi cinema “Mother India” [1957]. What has now become a legend is the event when Sunil Dutt, on the set of “Mother India”, saved the life of Nargis from a burning film set.  They were later married in what is considered one of the great fairy tale romances of Bollywood history.

At the reception organised in Athens in honour of the Indian Olympic Team, the Vice-president of ELINEPA, Dr. Helen Abadzi, as well as the life long admirer of Indian cinema, Dr. Emmanuel Tasoulas presented to the Indian Minister their book “Revelation of Hindi-Style Songs in Greece” that is dedicated to the Indian cinema of the ‘60s. They also presented him with a collection of Greek posters from Sunil Dutt’s films, which had been screened in Athenian cinemas at that time.

During his stay in Athens, the Indian Minister visited the Acropolis and other archaeological monuments. He expressed his admiration for the ancient Greek spirit, so close to the Indian heart. In answer to a question regarding the athletes of the Indian Olympic Team, he said: ‘‘these athletes are the pride of our nation. Whatever their performance may be, the status of their livelihoods will be more secure when they return from the Olympic Games”.

When he returned to India, Minister Sunil Dutt announced long-term benefits for the athletes, such as a life long health insurance scheme andrailway travel facilities.  He also visited Major Rajyavardhan Singh Rathore in his house in N. Delhi, where he congratulated him for the silver medal he won at the double trap-shooting event at the Athens Olympics. Up: Sunil Dutt after a pilgrimage in Acropolis.

Down: The Vice President of ELINEPA, Dr. Helen Abadzi (in the Olympic Volunteer’s dress) and Dr. Manolis Tasoulas present to H.E. the Minister for Sports, Mr. Sunil Dutt, a Greek posture from his popular movie “Sujata”.