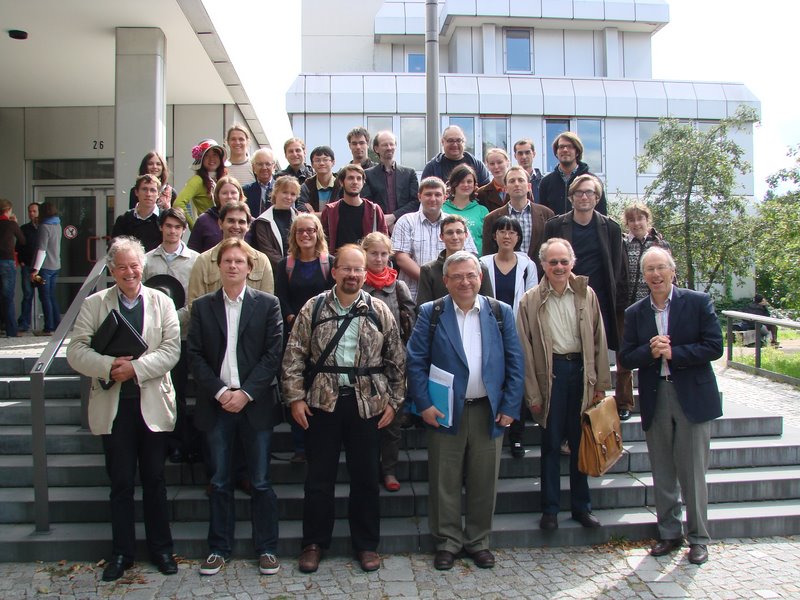 This year, between 6th and 10th September, for the seventh time the Indo-European Summer School was held at the Freie Universität in Berlin-Dahlem, Germany. The summer courses are an initiative of Michael Meier-Brügger, Hellenist and Indo-Europeanist linguist, Director of the Department of Comparative and Indo-European Linguistics at the same university.

This fascinating branch of studies, also known as Comparative Philology, has a long tradition both in Berlin and in Germany. Indeed, after the famous presidential address by Sir William Jones in 1786, German scholars, in whose country Classical Philology was then already being cultivated, immediately engaged in comparative linguistic studies, and Berlin was always in the forefront.

Meier-Brügger, the initiator, after receiving his PhD from the University of Zurich, did postdoctoral research in Erlangen, Paris, and Harvard. He was responsible editor of the Lexicon of Early Greek Epos (Lexikon des frühgriechischen Epos). The lexicon was outlined in 1944 by Bruno Snell, and was completed recently as announced by Meier-Brügger himself on May 28, 2010, during the 4th Trends in Classics International Conference held in Thessaloniki, Greece. Amongst his notable publications are the two volume Griechische Sprachwissenschaft(‘Greek Linguistics’, 1992), and the introductory volume Indo-European Linguistics(2003), with contributions by M. Fritz and M. Mayrhofer. The first Dahlem Summer School was held, with international participation, in 2004.

The 7th Summer School focused on syntax. The audience, more than 40 persons, well enough for a classroom, were also international including mainly, but not exclusively, PhD students arriving from China to the USA. To give lectures, the following professors were invited: Georges Pinault, Heinrich Hettrich, Albert Rijksbaron, Rutger Allan, and Thomas Krisch.

G. Pinault is Directeur d’Études, academic and researcher, at one of the highest French educational and research institutes in Paris, the École Pratique des Hautes Études. He has studied Classical Philology, with special interest in Greek, and Comparative Philology. His focuses are Vedic Studies, Indo-Iranian and Tokharian Linguistics, and the  Philology of the buddhist texts from Central Asia.

H. Hettrich is full professor at the University of Würzburg. His main concern is comparative syntax. He published numerous papers and books which range from Aegean and early Greek to Vedic. E.g. he published some observations on Mycenaean Greek and on the language of Herodotus. He also contributed to explaining the origin of the Accusative with the Infinitive construction, a syntactic tool that, under Latin influence, exists in English (cf. “I want him to come with me”, where “him” is the accusative and “to come” is the infinitive).

A. Rijksbaron is Professor Emeritus of Ancient Greek Linguistics at the University of Amsterdam. He is the author of many books, including Grammatical observations on Euripides’ “Bacchae”.

Th. Krisch, Chairman of Studies, is full professor at Salzburg University. He studied German Philology, Linguistics, and received also Music Education. He qualified as a professor in Comparative Philology and is also extensively engaged in Vedic Studies. He has published e.g. the 1st volume of RIVELEX Rigveda-Lexikon (2006). Others participating in the lexicon project are Christina Katsikadeli, St. Niederreiter and Th. Kaltenbacher.

Pinault gave five lectures on Tocharian Syntax. Tocharian is an extinct branch of the Indo-European language family. We know its two dialects: Tocharian A (or East Tocharian) and Tocharian B (or West Tocharian). These languages were spoken roughly from the 6th to 9th centuries AD in the Tarim Basin in Central Asia. A third branch, Tocharian C, is seen in a few loanwords in Prakrit. Tocharian script derives from Brahmi and is referred to as slanting Brahmi. Culturally, the language is important, among others, because of having been influenced by the Indian tradition in various ways. To be remarked that the Tocharians were one of the many cultural groups along the Silk Road in the Tarim basin, and although the written form of their language is of a relatively late attestation, on archaeological basis they may be assumed to have arrived there many centuries earlier. Answering a question, Pinault informed his audience that the important name giving construction “to put (=’give’) a name”, accompanied by a ceremony, as we are informed from Homeric texts e.g., existed also in Tocharian: ñom tá- (A), ñem tá- (B). To this Greek “onoma tithesthai” and Sanskrit “nāma dhā-” may be paralled. In Latin the formula “nomen indere” exists where the verb comes from “dare” (‘give’).

Rijksbaron and Allan discussed questions of Greek syntax, stylistics included. The former argued, among others, that the Greek formula “οὐκοῦν (…) οὐ”, found frequently in Plato, does not expect necessarily, as assumed in grammars, a negative answer. Surveying parallel examples from modern languages he introduced the term “window-openers”: “these are needed from time to time to follow the story”. Allan spoke about “The Greek middle voice as a polysemous network category” analyzing also the expansion of the passive aorist in -(θ)η, and expanding sometimes also on Modern Greek forms.

Krisch discussed questions of Proto-Indo-European syntax. With this label similar and parallel syntactic structures in different cognate languages are meant as well as an attempt to reduce them to a common prehistoric form. It was impressing that Krisch profusely availed himself of modern transformational syntax in his interpretations. Often, there is a gap between modern (structuralist) and traditional historical approaches in linguistics, and contemporary linguistic investigations, unless specified to the contrary, are assumed to be synchronic. Indeed, a traditionalist, as we saw here, is more open to adopt recent suggestions than a synchronist linguist is, as this writer personally believes based on his academic experience, to deal with historical data. Krisch began his survey with a joke: he “refuted” the statement that “Proto-Indo-European does not exist”. He showed details of a movie dealing with the prehistory of the Austrians taking the audience back to the Indo-European level. The actors “spoke” that reconstructed language. This was, of course, unintelligible even for the Austrians, and captions were needed where both Indo-European and translation appeared. The reconstructed speech was not arbitrary: it came from an expert, David Stifter, an academic at Vienna University. The message of this show was that methods and possibilities in reliable reconstructions are far better and more numerous than is frequently assumed, and in any case, scholarship is considerably superior to the possibilities of A. Schleicher when the latter reconstructed a tale for Proto-Indo-European in Aesopian manner some hundred-fifty years ago. The matter of Krisch’s lectures appears as one of the most fascinating and instructive domains of comparative philology implying stuctural comparison (Strukturenvergleich), the poetic language (Dichtersprache), poetic devices as known from the classical “art of speaking” (rhetoric, case syntax (syntaxis casuum), word order, to – as already mentioned – even modern Chomskian notions like the “Chomsky-adjunction” (a type of syntactic operation), not to speak of the contribution of an equally outstanding linguist of our time, P. Kiparsky, an authority on Pāṇiṇi. As can be assumed, the parallel passages are especially numerous between Greek and Indo-Iranian, and first of all between Greek and Vedic, both in content and in liguistic details. Such parallels sometimes even complete each other, i.e. if something is difficult to interpret in Greek a Vedic passage may be clarifying. This is the case e.g. of the Homeric “νυκτòς ἀμολγῷ” meaning ‘in the dead of night’ but this is really the “milking-time”. Indeed, a Vedic passage carries the information that for milking the night was preferred, some time before daylight. As certainly Indo-European, i.e. having a considerable time-depth are regarded by Krisch constructions like Greek “ἐν τ᾽ ἄρα οἱ φῦ χειρὶ ἔπος τ᾽ ἔφατ᾽ ἔκ τ᾽ ὀνόμαζε” (‘and she clasped her hand in his, and spoke, and called upon his name’, Hom. Il. 6, 253), Latin inque sepulchro eius est inscriptum (Enn. Var. 148f = Euhemerus 130f), Hettite an-da etc. The number of such principled and systematically repeating parallels is high. It may be reminded that for reconstructions not only phonology or morphology are indicated but alllinguistic levels, so the syntactic one too, and beyond it, the material, and mainly, the spiritual culture. Indeed, already William Jones, more than two-hundred years ago, pointed out similarities also in mythology, i.e. in the spiritual heritage.

Personally I would remark that the sometimes complicated reconstructions are important not only for linguistics but also for cultural history. Just like other results in mythology or psychoanalysis are informative on individual or on collective past events, diving into the linguistic prehistory of mankind yields insights that can and do help understanding political and cultural (pre)history, and vice versa. Jungian archetypes or Kerényi’s results are usually welcome. A reconstruction of a proto-culture, spiritual and material, of a proto-language is useful in the same way. It follows from the nature of linguistics and of comparative philology that the broader audience is less familiar with the respective results. I find some, perhaps not remote, parallels, with the Jung – Kerényi results. They have shown, even if not their only focuses, how important Indic and Greek spiritual facts (viz. mythology) are. The studies of the above Summer School lecturers and also their engagement and contributions equally show the importance of Greek and Indian (Vedic) cultural and linguistic tradition. Indeed, if not the exclusive ones, these cultures are perhaps the two greatest concerns of comparative philology.

I conclude remarking that these Summer School classes represented, as each time I was lucky enough to be present, a high standard scholarship useful for anyone engaged or interested in classics and linguistics. The gain is considerable, and Greek and Indic, in one way or another, are always present during the discussions.