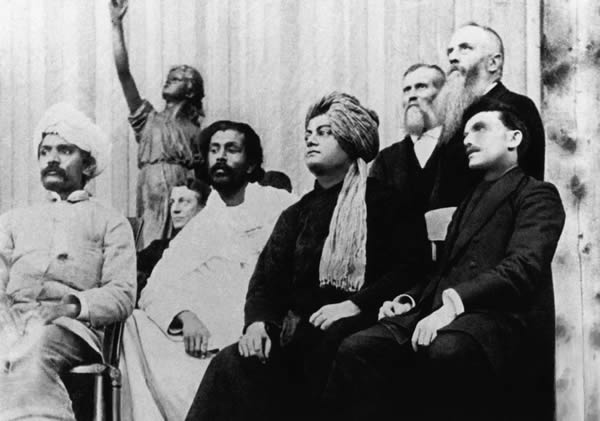 I will tell you a little story. You have heard the eloquent speaker who has just finished say, ‘Let us cease from abusing each other,’ and he was very sorry that there should be always so much variance.

But I think I should tell you a story which would illustrate the cause of this variance. A frog lived in a well. It had lived there for a long time. It was born there and brought up there, and yet was a little, small frog. Of course the evolutionists were not there then to tell us whether the frog lost its eyes or not, but, for our story’s sake, we must take it for granted that it had its eyes, and that it every day cleansed the water of all the worms and bacilli that lived in it with an energy that would do credit to our modern bacteriologists. In this way it went on and became a little sleek and fat. Well, one day another frog that lived in the sea came and fell into the well.

‘The sea! How big is that? Is it as big as my well?’ and he took a leap from one side of the well to the other.

‘My friend,’ said the frog of the sea, ‘how do you compare the sea with your little well?’

Then the frog took another leap and asked, ‘Is your sea so big?’

‘What nonsense you speak, to compare the sea with your well!’

‘Well, then,’ said the frog of the well, ‘nothing can be bigger than my well; there can be nothing bigger than this; this fellow is a liar, so turn him out.’

That has been the difficulty all the while.

Listen to the story in the video below after 4.15′