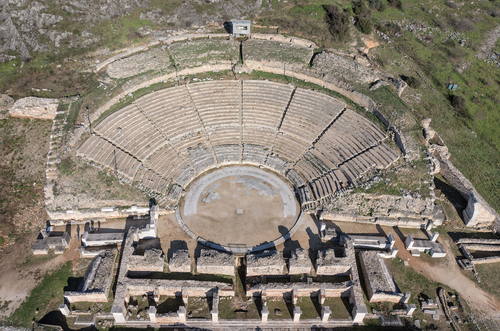 Unesco updated for the year 2016 its list of more than a thousand places of “outstanding universal value to humanity” including the archeological and historic sites of Filippoi (Greece) and Nalanda (India). Below you will find some useful information about these two sites which we recommend to add to your travel list. Where: Northeastern Greece, in the Kavala regional unit.

The remains of this walled city lie at the foot of an acropolis in north-eastern Greece, on the ancient route linking Europe and Asia, the Via Egnatia. Founded in 356 BC by the Macedonian King Philip II, the city developed as a “small Rome” with the establishment of the Roman Empire in the decades following the Battle of Philippi, in 42 BCE. The vibrant Hellenistic city of Philip II, of which the walls and their gates, the theatre and the funerary heroon (temple) are to be seen, was supplemented with Roman public buildings such as the Forum and a monumental terrace with temples to its north. Later the city became a centre of the Christian faith following the visit of the Apostle Paul in 49-50 CE. The remains of its basilicas constitute an exceptional testimony to the early establishment of Christianity.

The ancient Greek theatre of Filippoi was first restored in 1957 by Dimitris Lazaridis with a view of holding a cultural festival that takes place every year during the high tourist season in July and August with ancient and modern performances, ballets and concerts by theatrical troupes, orchestras and bands.

How to reach: The best way is to get a taxi or bus from the seaport city of Kavala. Its about 15mins journey (16.2 km) and stops right outside the site. Where: Northeastern India, in the State of Bihar.

The Nalanda Mahavihara site comprises the archaeological remains of a monastic and scholastic institution dating from the 3rd century BCE to the 13th century CE. It includes stupas, shrines, viharas (residential and educational buildings) and important art works in stucco, stone and metal. Nalanda stands out as the most ancient university of the Indian Subcontinent. It engaged in the organized transmission of knowledge over an uninterrupted period of 800 years. The historical development of the site testifies to the development of Buddhism into a predominant religion and the flourishing of monastic and educational traditions.

How to reach: Add Nalanda in a  religious and cultural tourism package that includes other important Buddhist sites in the State of Bihar, like Bodh-Gaya and Rajgir. All these sites are well interconnected via train and bus. Nearest airports: Patna ( 57 km) and Gaya (61 km).