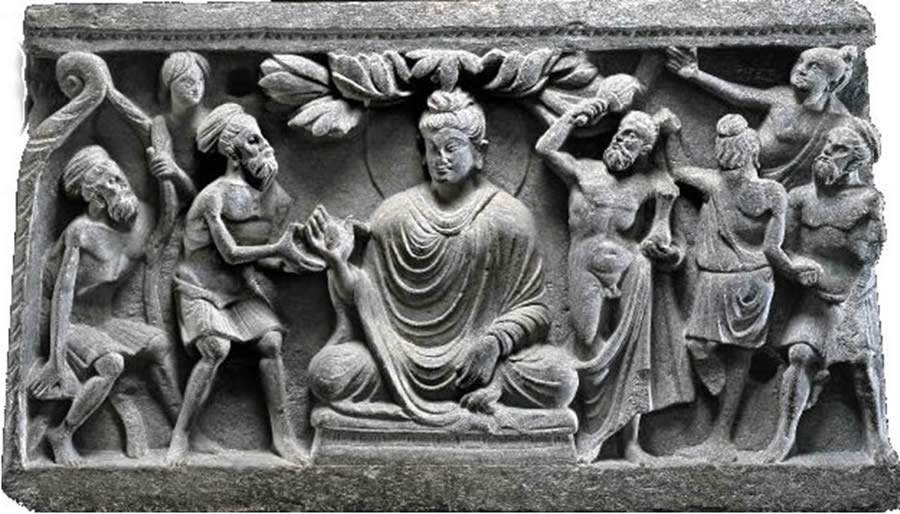 On a holiday to the Greek island of Crete a few years ago we took a day trip to visit archeological sites. At one spot the tour guide said that people in the area used to worship Goddess Gayatri. I asked my wife if she heard Gayatri and she said yes. I spoke to the tour guide and told him that we still worship goddess Gayatri. He said he was not surprised. There was Hindu influence he said. The Greeks were impressed with the Vedic culture as far back as 200 BCE. We can see this evidence in what is called the Heliodorus column which was erected by the Greek ambassador to India in 113 BCE at Besnagar in central India. ( present day city of Vidisha in Madhya Pradesh ).The inscription on the column, as published in the Journal of the Royal Asiatic Society, says:This Garuda column of Vasudeva (Vishnu), the god of gods, was erected here by Heliodorus, a worshiper of Vishnu, the son of Dion, and an inhabitant of Taxila, who came as Greek ambassador from the Great King Antialkidas to King Kasih Putra Bhagya Bhadra, the Savior, then reigning prosperously in the fourteenth year of his kingship. Three important precepts when practiced lead to heaven: self-restraint, charity, conscientiousness.This shows that Heliodorus had become a worshiper of Vishnu and was well versed in Hindu texts. There are statues of Greek men wearing a Indian Dhoti with a Vaishnava mark on their forehead The Greeks were known as Yavanas in India and there is a mention of them in the Mahabharat.

The legendary story of Hercules has parallels to stories of Krishna and Balaram. Hercules killed many demons as a child and one of them was of killing a demon who came to breastfeed him. It is an exact replica of the story of Krishna killing Putana. So many other Krishna adventures are similar to adventures of Hercules.

Plato’s ( 428-347 BCE ) book Phaedrus follows similar themes as the Bhagvad Gita. The idea of the Soul, its release from the body and its transmigration are all explored by Plato. The Chariot allegory  mentioned in the Katha Upanishad (1:3:3-9), one of the oldest and main Upanishads is also used by Plato. The following is a brief translation of the allegory by Charles Johnston:

In the Mahabharat the Allegory is brought to life in the characters of Krishna (the lord of the chariot), Arjuna who rides as the passenger but also directs Krishna where to move with the chariot, the horses, and lastly the entire setting—for Arjuna directs Krishna to move the chariot between the two opposing armies, themselves symbolizing the lower and the higher nature. The whole of the Bhagavad Gita can be read as a kind of unfoldment of the Allegory first given in the Katha Upanishad.

Aristotle’s (382-322 BCE ) De Anima has parallels with the Upanishads. . Bradley Y. Bartholomew an Independent Researcher in his paper presents an original interpretation of the Upanishads that the inner self is located in the embryo brain region of the brain. It is the part of the brain that operates during dreaming and deep sleep and causes the transition from sleeping to waking states, and the Upanishads state unequivocally that the self is responsible for these mental states. Aristotle arrives at the same conclusion. All the great Greek philosophers were fervent vegetarians. Plutarch, Aristotle, Plato, Pythagoras and Socrates all were vegetarians and promoted a vegetarian lifestyle. They also believed in the fundamental Hindu ideas of the eternal soul, reincarnation and the idea that the external world that we perceive through the senses is ultimately unreal. Plato in his book the Republic recommended that an ideal city should be a vegetarian city. He also said that an ideal society should be divided into four groups just as the Hindu system.

Alexander the great invaded India in 362 BC. he was confronted by the Hindu king Porus. Fatigued by wars, Alexander’s men revolted and refused to go further into India. Alexander had to return. While in India Alexander came into contact with Hindu ascetics and in a conversation with them, he was told:

“King Alexander, every man can possess only so much of the earth’ surface as this we are standing on. You are but human like the rest of us, save that you are always busy and up to no good, traveling so many miles from your home, a nuisance to yourself and to others. Ah well! You will soon be dead, and then you will own just as much of this earth as will suffice to bury you.” Alexander was impressed by the ascetics and took one of them called Calanus with him.

After the death of Alexander, the mighty empire of Chandragupt Mayura defeated Greek forces. He married a Greek princess Helena and a peace treaty was signed between the two powers.

Sir William Temple ( 1628-1699) declared that , ‘ Indian philosophers were the originators of the Greek ideas of vegetarianism to eternity of matter ‘

John Archibald Wheeler ( 1911-2008 ) eminent American physicist, the first one to be involved in the theoretical development of the atomic bomb suggested, ‘ I like to think that someone will trace hoe the deepest thinking of India made its way to Greece and from there to the philosophy of our times.

Under the patronage of Emperor Ashoka ( 268 to 232 BCE ) Buddhism spread all over Asia.

Greek monks played a direct role in the upper hierarchy of Buddhism, and in its early dissemination. During the rule (165–135 BC) of the Greco-Bactrian King Menader 1, Mahadharmaraksita (literally translated as ‘Great Teacher/Preserver of the Dharma’) was a Greek.  Bactria was in Central Asia in what is present day Turkemenistan, Afghanistan, Uzbekistan and Tajikistan populated by Persian Zorostarians and Buddhists.

At the time of Alexander the Great, Greeks conquered a large part of Asia. From Asia Minor to modern day Afghanistan, Pakistan and the north east of India. Greek influence continued after Alexander’s death as a number of Greek kingdoms were founded in Asia. Evidence of Buddhist expansion during the Indo-Greek period (starting in 180 BC) comes from coins; the significant  number of Stupas built during that period and statues depicting the Buddha  accompanied by Greek gods and goddesses. In Greco-Buddhist culture and art Greek gods are  considered as guardians to the Buddha or are represented as angels accompanying Buddha during important events from his life. The statues of Buddha are actually protected by Helenic gods.

The religion that was practiced by the Indo-Greeks who followed Buddhist philosophy but who continued to adhere to the Greek customs and cultures is known as Greco-Buddhism. Greco-Buddhism is a form of Hellenism which adapts Buddhism into itself, or a form of Buddhism that embraces the Hellenic culture. Greco-Buddhism can be seen in two ways. It can be seen as the cultural and religious syncretism between Hellenic culture and Buddhism. On the other hand, it’s the adoption of the Buddhist philosophy by a person with a Hellenic background.  Buddhism  spread quite rapidly among the Greeks of Alexandria of the Caucasus and Taxila to the point that in Asoka’s time these cities were considered as main Buddhist centers. The traditional Hellenic religion also continued to have a strong following.

.In the Mahavamsa a chronicle dedicated to the kings of Sri Lanka, the high monk present in the devotion of the high Stupa ( a hemispherical structure containing relics and used as a place of meditation) was a Yona (Greek) monk called Dharmarikkita who brought 30,000 Greek monks from Alexandria of the Caucasus to join him. A monk with the same name was sent north by Asoka to spread the rock edicts in the Greco-Bactrian lands.According to the Mahavasma early Buddhist in Sri Lanka went to Alexandria of the Caucasus to learn Buddhism.

The arrival of Roman empire along with Christianity spelled the end of Greek heritage. There was wholesale destruction of the statues of what were considered Pagan gods. Christians came to be known as , ‘ those who move that should not be moved’.

Nitin Mehta was born in Kisumu, Kenya. He has lived in the UK for many years.  He is a dedicated professional with an excellent reputation in organising cultural events. He is a passionate and a renowned speaker on India’s spiritual heritage as well as vegetarianism and veganism. He is also an active campaigner for animal rights. He was instrumental in setting up the first vegetarian society in Kenya, Mauritius, New Delhi, Paris, Lisbon and in the states of Punjab and Andhra Pradesh, India. Apart from English he speaks fluent Swahili, Hindi, Gujarati and Punjabi. Nitin holds a degree in Sociology from Goldsmiths and is the owner of an Auto Parts business.