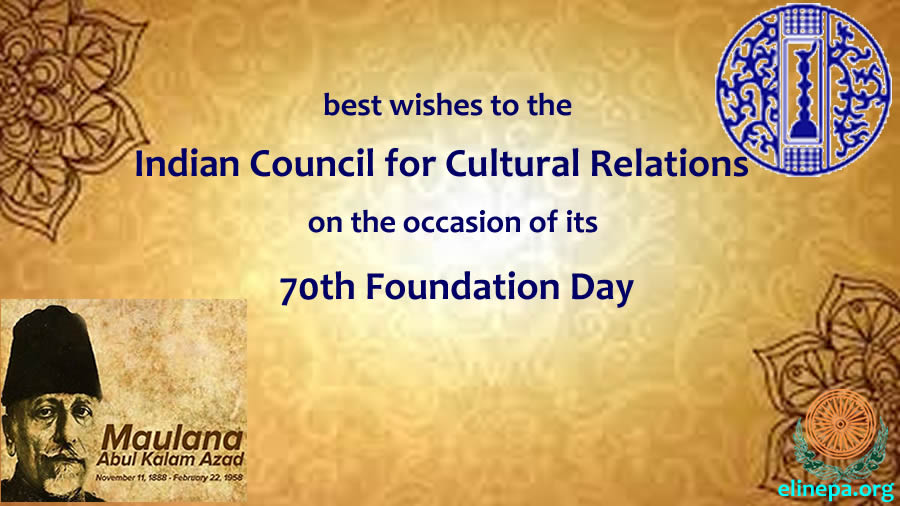 The Indian Council for Cultural Relations (ICCR)  celebrated its 70th Foundation Day on 9 April 2020. However, the grand celebrations planned earlier are now postponed by a year due to the coronavirus outbreak.​

ICCR President Dr Vinay Sahasrabuddhe said on the occasion that Indian philosophy’s understanding of the whole world as a family (Vasudhaiva Kutumbakam)  has become more relevant as the entire global community is facing an unprecedented challenge, feeling lonely and disconnected.​

“ICCR is all about cultivating an enlightened understanding of Indian culture and even in this lockdown situation, it continues conducting e-tutorials in yoga, classical dances and Hindi and Sanskrit. We are  working with a ‘show must go on spirit’. A Global Art Competition on the theme of facing the challenge of Covid-19 unitedly has already been announced and through such programmes we will rise to the occasion” he said, according to an official release.​

“70 years of taking India to the world. Congratulate @ICCR_Delhi on its 70th Foundation Day. The essence of Indian Council of Cultural Relations – Vasudhaiva Kutumbakam – the world is one family- is more relevant than ever today,” he wrote in a tweet.​

Several scholars and artists around the world expressed also their congratulations and gratitude to the ICCR on its 70th Foundation Day. The chairman of ELINEPA Dr. Dimitrios Vassiliadis, who received ICCR scholarships and Fellowship twice, wrote in a tweet:

“ICCR’s constant and uninterrupted work demonstrates India’s willingness to continue to be a cradle of world culture by contributing to the peaceful coexistence of peoples through the intercultural dialogue, the arts and the letters, which have always been fundamental to Indian Culture and Civilization.​”

ICCR was founded in 1950 by India’s first Education Minister, Maulana Abul Kalam Azad, with the objective of fostering and strengthening cultural relations and mutual understanding between India and the world, and to promote cultural exchanges with other countries and people.​

During the last seven decades, the ICCR has promoted India’s millennia old civilizational and cultural values to the world by establishing Indian Chairs in foreign institutions and universities, by sponsoring visits of Indian cultural and academic delegations and by  organizing Art Exhibitions and Festivals of India abroad. At the same time it hosts several foreign cultural troupes and international Cultural Festivals in India and offers annually about 4.000 scholarships and fellowships to foreign students and research scholars to study in various Indian Universities and Institutes.​