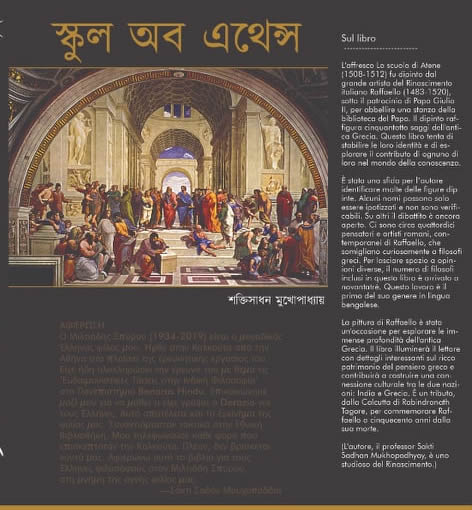 The framed fresco, The school of Athens (1508—1512), was painted by Raphael (1483—1520), a great artist of the Italian Renaissance, under the patronage of Pope Julius II. It was intended to beautify a room in the Pope’s library. The painting depicts some wise men of ancient Greece. There are fifty-eight of them.

This book attempts to establish their identities and explore their contributions in the world of knowledge. The author, however, has faced challenges in identifying the painted figures. The identities of a few of them had to be conjectured; they could not be ascertained. Debates exist around the name of some others. There are about fourteen Roman thinkers and artists, contemporaneous with Raphael, who bear strange resemblance to Greek philosophers. To allow space to diverse opinions, the number of philosophers included in this book has reached ninety-three.

This work is the first of its kind in the Bengali language. Raphael’s painting has been an occasion, to delve into the bounteous depths of Greek antiquity. The book shall enlighten the reader with interesting details about the rich heritage of Greece and help build a cultural connective between the two nations— India and Greece. It is a tribute from Rabindranath Tagore’s Kolkata, to commemorate Raphael, five hundred years after his death. Salutations to the Italian Renaissance! Salutations ancient Greece!

The book is dedicated to the Greek Indologist Dr. Miltiadis Spyrou.

*The author, professor Sakti Sadhan Mukhopadhyay, is a Renaissance scholar.