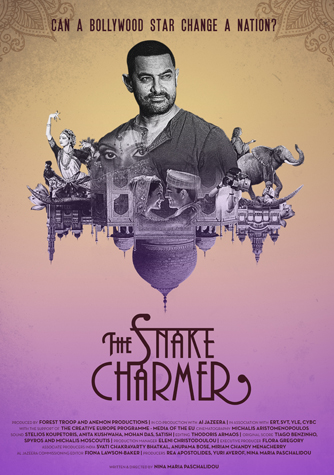 The Snake Charmer follows Amir Khan, one of the most popular and influential Bollywood actors in India today, on a journey across India, as he uses his gifts as a charmer to lure his audience into adopting radical new ideas and practices concerning the way men treat women in India.

Interviews with famous Bollywood directors and actors help to further explore the role of cinema and TV in shaping the values and mentalities in Indian society during the last decades and how it’s changing today in the wake of a spiraling wave of violence against women in India.

* Nina Maria Paschalidou is an award-winning documentary filmmaker, producer and an acclaimed Greek journalist. She is also the founder of Forest Troop, an independent documentary and multimedia group.  Since 2007, she has been a producer for “Exandas” Documentary Series», a multi-awarded documentary group (www.smallplanet.gr). Her productions «Digital Cemeteries» exploring e-waste recycling in China and «Dying in abundance» a film about the food crisis filmed in India and the USA, have won many international awards.