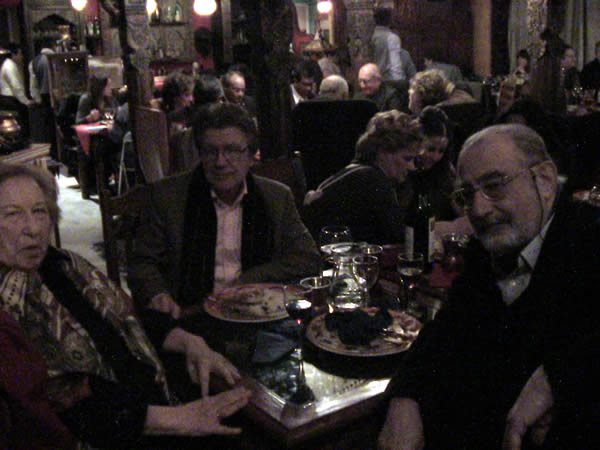 We are glad to announce that Arthur Spyrou, a friend of India and son of the late Greek Indologist Miltiadis Spyrou has been appointed as the next ambassador of Australia to Greece. ELINEPA expresses its warmest congratulations!

Greek Indologist Dr. Miltiadis (Milton) Spyrou passed away on September 23, 2019, in Athens at the age of 85. He left one son Arthur Spyrou, who serves as Australia’s ambassador to the United Arab Emirates, and three grandchildren. His wife, Kate, also an Indologist, died last year. The Hellenic-Indian Society for Culture & Development expresses its sincere condolences to his family and relatives.

Miltiadis Spyrou was born on September 11, 1934, in Komotini and followed in his youth the profession of a seaman. By the end of the nineteen-sixties, his ship arrived in Kolkata. He visited the city and the Greek Church at Calighat and fell in love with India and its people. He learned the Bengali language and decided to study Indian philosophy and culture. He received his M.A. degree in philosophy from Jadavpur University in Kolkata and he was the first Greek to obtain a doctoral thesis at an Indian university. He completed his doctoral dissertation, “Eudaemonistic Trends in Indian Philosophy,” under the supervision of Professor N.K. Devaraja and was awarded the degree of Doctor of Philosophy from Banaras Hindu University in 1971. He also studied at Visva-Bharati University, which was founded by Rabindranath Tagore in West Bengal.

After the completion of his studies, Miltiades Spyrou served as a senior officer of the Greek National Tourism Organisation in Greece and Australia. He continued, however, to visit and contact research in India. His latest research was focused on the Greeks who lived in Bengal and India – a work that he left unfinished. During his last visit to India, he fell seriously ill and his Indian friends at the Greek Club “Kyklos” in Kolkata did no less than save his life.

His love of India, its culture, its literature and its people was his life’s purpose and it sustained him and was in his thoughts to the very end.

Review on “Eudaemonistic Trends in Indian Philosophy by Miltiades Spyrou.” A Ph.D. thesis submitted for the degree of Doctor of Philosophy at the Banaras Hindu University.

Spyrou posits a thesis relevant to the need of a clarification of the human nature both as it is manifested in the concrete existential situation and also as it is sought to be realized in its ultimatiness. It is the contention of this scholar that human activity in all its manifestations (i.e. physical, intellectual, and spiritual) revolves around the axis of an intrinsic impulse for pleasure and happiness. The Greek term “eudaimonia” is used here for the entire domain of this human dimension, but also to denote a positive optimistic, world-affirming, life-loving attitude on the part of the individual which also includes the desire for long life and immortality.

In the introduction to his Thesis, Spyrou extensively explores the relevant concept under the main headings, “Is Indian Philosophy Pessimistic?” and “Is Indian Philosophy Eudaemonistic?” and strives against the one-sided idealistic way in which the spirit of Indian philosophy has been presented by previous scholars in India and in West. He desires to discuss one of the least conspicuous aspects of Indian philosophy in order to show both its importance and its prominent position in all Indian schools of thought. He illustrates a dimension that has either escaped the attention of most moral philosophers or was willingly overlooked.

In the main body of his dissertation, Spyrou searches to find eudaemonistic trends in each Indian philosophical school separately. These include: the hedonist Cārvāka, the realistic dualism of Sāńkhya, the practical way of Yoga, the logic and epistemology of Nyāya, the metaphysics and ontology of Vaiśeṣika, the realistic and relativistic pluralism of Jain philosophy, the pluralistic realism of Mimāṃsā, the monistic idealism of Vedānta (which he limits in the exploration of Advaita Vedānta), and the moral teachings of Buddhism [where the author claims a correct understanding of the fundamental concept of ‘Dukkha’ (suffering) that refutes the basis of a pessimistic, other-worldly, and life-negating mis-orientation].

Spyrou concludes that the presentation of Indian philosophy by western scholars does not do justice to the spirit of it. He finds in each school that Indian philosophers’ preoccupation with pain is only initial. It comes as a problem of and hindrance to the unfolding of the individual’s real nature, which, by all schools is conceived as being alien to pain. Spyrou distinguishes between the pain conceived by ordinary people as an experience compared to pleasure and that which he calls ‘philosophical pain’- the dissatisfaction with everything finite, impermanent, impure and imperfect. Instead of condemning the basically hedonistic nature of man, this tendency is seen as the basis on which the ‘Golden Rule” for the behavior of man towards his fellow-creatures develops.

It was also interesting to find out that most of what appears to be an attack on pleasures and desires is, in fact, a fine analysis of these states and a careful distinction from attachment. This conclusion led the Indian philosophers to the discovery of the detachment which was subsequently offered to humanity as a panacea for every pain and as a secure way to real happiness.

Another important conclusion is the establishment of a universal causal relation between virtue and happiness which was accepted by all the schools of thought. Indian philosophy consequently is there-in conceived as positive in its character and inspiring to the individual. Desires, pleasure, happiness, and absolute bliss were originally well defined and given their true importance in the Indian philosophical texts. The analysis of the blissful state has shown that it is characterized by the absolute absence of pain, infinite peace, perfection, and tranquility. It is a state which is agreeable because one rests in complete harmony with one’s true nature (štmasantoṣa).

Spyrou’s pioneering thesis is an outstanding example of a sincere thorough work that will be appreciated not only by scholars interested in Indian philosophy and religion, but also by those who are searching to find solutions to corporeal, ideological, and psychological conflicts in other parts of the world.