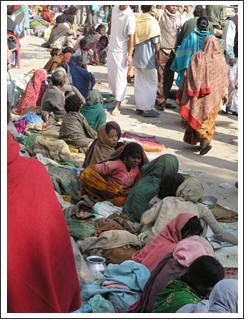 The New Year celebrations went quiet as people throughout the world watched the horrific scenes brought to our houses by the means of mass communication. The destruction ofbiblical proportions that affected the countries of  the South and South-East Asia after the powerful earthquake of the 26th December 2004 left behind hundreds of thousands dead and millions homeless in a situation of direct need of help for  survival. Leading celebrities and government officials, such as the General Secretary of the U.N., Mr. Kofi Anan, characterized the tragedy in the Indian Ocean as the largest destruction that has ever faced the Organization and pointed out that it will take at least ten years and many billions of dollars to restore the economies of the affected countries.

We were impressed by the unprecedented response and mobilisation of people globally to the calls for help. Governments, armies, church organizations, associations, as well as individual citizens of every age and social level, responded to the call for those affected and offeredsupport from their savings sometimes even at the cost of  privations.

The response of the Greeks was uncommonly generous. The Ministry of Foreign Affairs approved immediately the grant of U.S. $ 400,000  while the Deputy Minister of Foreign Affairs,Mr. E. Stylianidis stated that, even by the 3rd January 2005, Greece had already sent 400 tons in food, water, tents and medico-pharmaceutical materials. A plane with men of the special rescue unit departed for the affected regions. This was followed by the departure of a cruise-ship that was converted into a floating hospital in Sri Lanka.

At the same time, an effort began for the concentration of humanitarian help from NGO’s, Churches, pan-Hellenic federations, municipalities, the media, and private companies.  In the two-day Marathon of Support that was organised by the National Television of Greece (ERT) with the collaboration of Ministry of Foreign Affairs, a total of 17 million Euros was collected, while another one million of Euros was collected in the special programme that was organized under the name “Gifts of Humanity” by the “NET” TV Channel.

The charitable organisation “Solidarity” of the Greek Orthodox Church also acted swiftly, and with no delay sent 14 tons of first aid to the affected regions of India and Sri Lanka. The GreekOrthodox Churches of America, Kolkatta, and Hong-Kong as well as the International Orthodox Christian Charities (IOCC), also provided help to the victims.

In this materialistic world we live in, it is heart-warming to see such spontaneous generosity of the international community. People continue to feel and sympathize with their fellow men that suffer, regardless of the country and the distance in which they live. However, a number of problems arose and should be taken into consideration, if we would like to have a more effective distribution of the aid provided and implement a restriction of the cases of profiteering and exploitation.

At the beginning the discrepancy between the foreign aid pledged by governments and the actual amounts that reach the affected countries, should be noted, as, for example, was the case with the destructive earthquake in December 2003 in Iran, where instead of the 1.2 billion dollars that was pledged, less than one tenth reachedTehran.

The corruption of governmental institutions in the developing countries constitutes one of the biggest headaches for the donors. A characteristic example is the donation of the international community for the eradication of leprosy in South Asia. The financial help provided is more than enough, but the illness remains undiminished. Another problem is the partial distribution of aid only to the governments’ people, thus leaving out whole groups of citizens such as critics and rebels.

The stemming of corruption may be feasible with the help of foreign missions acting as mediators. In the recent Asian crisis, particularly effective were the interventions of the American and Indian military helicopters and ships in the affected regions of Indonesia and Sri Lanka. Other countries could emulate this example, and already Japan has announced the assignment of a military unit to help the affected region, thus demonstrating that the military machine can be transformed and used for peaceful and developmental purposes. Such an approach may prove to have more positive results in the policy as well as in the economy of the developing countries.

The services provided by international organizations are often problematic because overheads absorb a large proportion of their resources. The same problem, but to a smaller degree, is also present in the local NGOs, as charity from abroad is often seen as an easy way to accumulate wealth. The charitable work of religious organizations is also faced with scepticism. The local population may be concerned with charitable works deemed as having an underlying agenda ofproselytising.

There is also a confrontation between receiving foreign aid and maintaining national dignity. A clear example was the “nationalistic” handling of the tsunami disaster by the government of India, which contrary to the earthquake of Gujarat in 2001, did not accept help from foreign governments despite the serious destruction that the states of Tamil Nadu, Kerala, Andra Pradesh and the islands of Andaman and Nicobar suffered. India’s decision obviously aimed to demonstrate to the international community that it can face its national crises alone, but, nevertheless, such foreign aid may be vital for smaller countries such as Sri Lanka. The national and international NGO’s need to be encouraged and activated, otherwise there is a danger thatthe affected people will be left just with national pride.

Despite the multiple problems of world crises, the supply of foreign aid should not cease.  On the contrary, international solidarity needs to be intensified. Our humanitarian response should not be directed only by what the media consider as “newsworthy”, but it should be a permanent expression of compassion towards all suffering beings. One of the things that we can learn from the Tsunami in 2004, is that collective actions and management are very important for the preservation of our human identity and international security. The increasing mobility in aglobalized world has shown that even wealthy nations cannot keep their citizens secure at their holiday resorts and business destinations abroad. Earthquakes, floods, hunger, hurricanes, and epidemics do not constitute a new phenomenon in the history of humanity. They will always exist and can never be completely controlled. However, nature’s destructive potentials can be minimized, if we combine our humanitarian response with technological forecasting, sound economic development and sustainable growth policies.