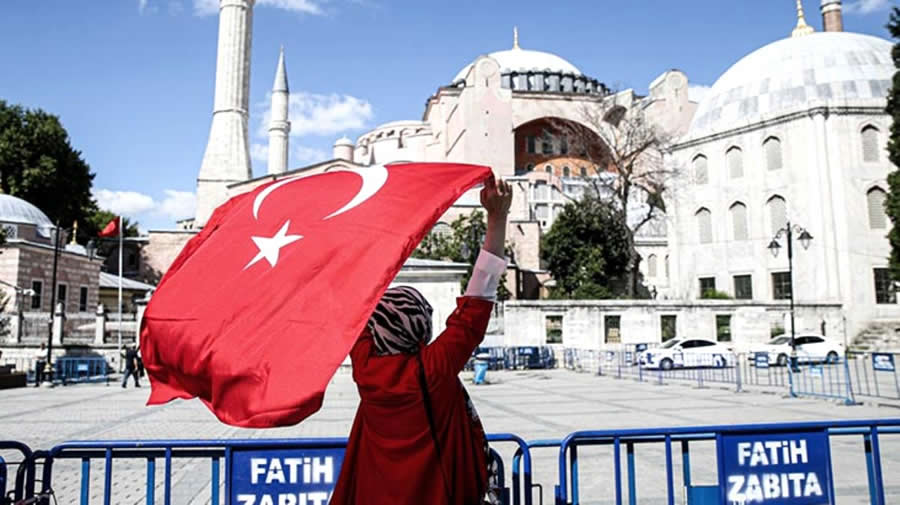 By converting the Hagia Sophia into a mosque, Erdogan has symbolically unsettled Ataturk’s vision of Turkey. He has revived the memories of Turk conquests that had tormented Europe

Hagia Sophia is the most recognisable symbol of Istanbul (formerly Constantinople). For the last 85 years, this grand edifice has also embodied the idea of the Turkish Republic which Mustafa Kemal Pasha (later called Kemal Ataturk) founded in 1923. A cathedral for the first nine centuries of its existence and a mosque for nearly 500 years after that, it has been functioning as a museum since 1935. Recently, on July 10, Turkish President Recep Tayyip Erdogan decided to repeal Ataturk’s decree which had declared it a museum. Hagia Sophia is now officially a mosque. However, far from being dropped from the museums’ portal of the Turkish Government (https://muze.gen.tr/), it is still being cherished as the most important one.

Erdogan’s decision has undermined the image of Turkey at two levels. First, his act is a negation of the Kemalist legacy of Laiklik (or Laicism), according to which, the Turkish State is avowedly secular. Second, at a deeper level, Erdogan has refreshed the memories of the Turkish aggression, which left the Greeks deeply scarred from the Battle of Manzikert (1071) to the invasion of Cyprus (1974). Turkey’s international standing is likely to suffer in the West.

Erdogan’s motives have always been suspected. However, apprehensive of an intervention from the nation’s ultra-secular Army, or the fear of the road to the European Union being permanently blocked, he previously stopped short of reversing the Ankara consensus on Turkish secularism. Two decades ago, Erdogan had publicly recited a poem, “The mosques are our barracks, the minarets our bayonets, the domes our helmets and the faithful our soldiers.” It led him straight into prison for four months. He was also banned from holding any political office. The ban was later rescinded five months after his party, the Justice and Development Party (AKP), swept to power in the November 2002 elections in Turkey.

Hagia Sophia was the most exquisite cathedral of the Eastern Church. It was commissioned by Justinian, the Byzantine Emperor, as part of a massive rebuilding of Constantinople, which was ravaged during the Nika riots (532 AD). “Abandoning the traditional basilican form”, says Will Durant, “they conceived a design whose centre would be a spacious dome, resting not on the walls but on massive piers and buttressed by half a dome at either end.” (The Age of Faith, Pg, 130). The magnificent cathedral built at a huge cost was the result of five years of labour by 10,000 workers, with Justinian intensely supervising the construction work. He inaugurated the cathedral on December 26, 537 AD. It was thus a work of love, devotion and dedication.

Hagia Sophia passed off under Turkish control on May 29, 1453 AD, coinciding with the conquest of the Constantinople by Sultan Mehmet II. Edward Gibbon poignantly describes the episode in Chapter 68 of his classic book, Decline and Fall of the Roman Empire. Under the orders of Mehmet II, the cathedral was converted into a mosque, though it kept its Greek name ‘Ayia Sofia’ (Holy Wisdom). Six minarets were constructed, the icons of the walls were plastered and a crescent moon was installed upon the top of the dome.

Yet, why did the fallen cathedral continue to occupy a central place in the Greek consciousness, surpassing in a sense even the Parthenon on the Acropolis of Athens? Nine decades after Greece’s independence, as late as in 1919, the Greeks had invaded Turkey, which was then in the throes of a revolution, hoping to redeem Constantinople and hold a mass at the Hagia Sophia.

This is because it is Christianity that forged a unified nation out of the Greeks. If today Greeks from Athens down to the remotest Dodecanese islands could feel and respond as one nation, the credit should go to a Constantine or Justinian rather than a Pericles or Thucydides. Ancient Greece no doubt evokes a sense of awe and wonder. Nine-tenth of the scholarship on Greece is still concentrated on its ancient period for good reasons. However, it was actually the Byzantine period (fourth to 15th century AD) that forged the spiritual and political unity of the Greeks. While the world might consider Iliad and Odyssey to be the most influential work written in Greek ever, to a native of Greece, it is New Testament of the Bible.

The ancient Greek religion, without a scripture, proved to be the weakest link in the civilisation. The ascending Greek philosophy and natural sciences hollowed it out completely. “The terrible conflict between philosophy and religion,” informs Will Durant, “runs through the thought of fifth century BC.” (The Life in Greece, Pg, 321). This was one reason behind the fall of tragedy, based on religion and mythology, and the consequent rise of comedy on the Greek stage in the fourth century BC. Second, from the very days of city-states to the era of Seleucid, Ptolemaic and Antigonid Empires, the Greeks had remained politically disunited, notwithstanding their linguistic and mythological commonality.

The Byzantine empire, whose establishment coincided with the State approval of Christianity, secured political and temporal unity for the Greeks. This civilisation was centred on Constantinople — a city inaugurated by Constantine on May 11, 330 AD — which the Greeks considered as their “eternal capital.” “Here beyond all expectations”, says Will Durant, “Greek civilisation would display a saving continuity, tenaciously preserve its ancient treasures and transmit them at last to Renaissance Italy and the Western world.” (The Age of Faith, Pg, 4).

Constantinople, 567 years after its fall to the Turks, is still the spiritual centre of the Greek Church. The Ecumenical Patriarchate of Constantinople is based in St George Cathedral, Istanbul. It might be remembered that the then Patriarch, Gregory V, had triggered the Greek War of Independence on March 25, 1821, by exhorting the Greeks to rebel against the Ottoman. He was hanged for sedition at the main door of the Patriarchate, which has since then been welded shut. The anti-Greek riots of September 6-7, 1955, decimated the Greek community left in the city after the exchange of population mandated by the erstwhile League of Nations in 1923. Another church the Holy Saviour in Chora which was converted soon after the fall of Constantinople to the Ottomans into a mosque was converted to a museum in Istanbul. That was, however, after Ataturk in 1958.

The Constitution of Greece (2001) makes zero reference to the ancient Greek civilisation. This is in stark contrast to the Constitution of Egypt (2014), which waxes eloquent about ancient Egypt. However, it expatiates upon the relationship between the Church and the State. The Constitution (Article 3.3) affirms that the text Holy Scripture (Bible) shall be maintained unaltered. The official translation of the Greek Bible into any language of the world would require prior permission of the “Great Church of Christ in Constantinople” (meaning the Patriarchate).

It is not anybody’s case that the denizens of Constantinople were facing crunch of mosque space to  offer prayers. There are already too many of them. “Most visitors in Istanbul,” says a travel book, “will immediately be struck by the quantity of mosques, from the domed buildings dominating skyline to the small neighbourhood mosques which would pass unnoticed were it not for the minarets” (DK Eye Witness Travel-Istanbul, Pg, 36). There are around 24 mosques, originally Byzantine churches, which dot the seven hills of Constantinople. Why is Turkey deliberately setting the clock back?

*Priyadarshi Dutta is an Indian author and independent columnist. The views expressed are personal.

Republished with minor changes and permission from the author. Originally published in Pioneer Daily, July 27, 2020.