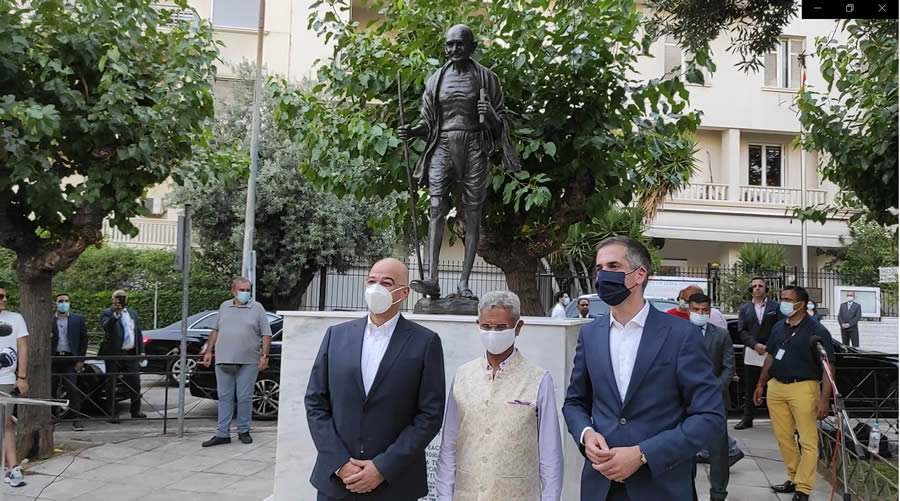 The unveiling of the statue of Mahatma Gandhi was held on Saturday, June 26, 2021 at 7.30 pm by the Ministers of External Affairs of Greece and India Mr. N. Dendias and Dr. S. Jaishankar in a special event organized by Mayor of Athens Mr. Kostas Bakoyannis in front of the Embassy of India in Athens.

In their addresses at the event, the Mayor and the two Ministers expressed the belief that the new statue will act as a strong symbol of friendship and shared values between Greece and India. FM Nikos Dendias paid tribute to Gandhi’s legacy for his country and humanity as a whole, stressing that Greece and India honour his memory by working towards promoting global peace and stability.

In the unveiling ceremony, which due to the pandemic was attended by a few guests, present were the Ambassador of India to Greece Mr. Amrit Lugun, the Chairman of the Greece-India Parliamentary Friendship Group and former Prime Minister Mr. George Papandreou, the chairman of ELINEPA and GIBA Dr. Dimitrios Vassiliadis, ambassadors and diplomats from Greece and third countries and representatives of the press and Greek-Indian cultural and business organizations.

The base of the statue has the phrase of Mahatma Gandhi “THERE IS NO WAY TO PEACE, PEACE IS THE WAY” which characterizes his predominant belief in non-violence (ahimsa).

After the unveiling ceremony the Ambassador of India hosted in honor of the Indian Minister of External Affairs an official dinner at the Hotel Grande Bretagne, which was attended by the Greek Minister of Foreign Affairs Nikos Dendias, Padma Shri Nicholas Kazanas, President of ELINEPA Dr. Dimitrios Vassiliadis, senior officials of Greek Ministry and members of the Indian delegation.

Cover photo (from left to right): Greek Minister Nikos Dendias, Indian Minister S. Jaishankar and the Mayor of Athens Kostas Bakoyannis in front of the statue of Mahatma Gandhi after the unveiling.