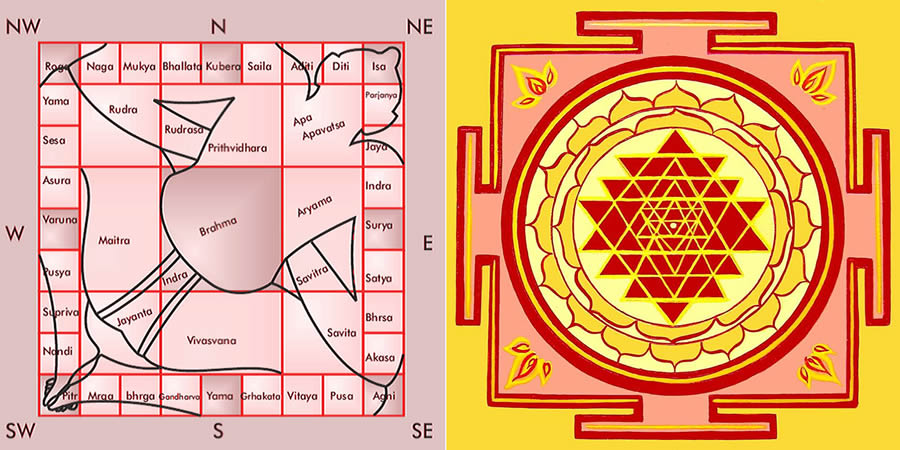 With these words from the Greek sophist Protagoras, Kapila Vatsyayan begins the chapter “Fundamental Principles Underlying Indian Architecture” in the catalogue “Vistara_The Architecture of India”.

In the same, an introduction by Charles Correa, begins with a similar thinking :

“We live in a world of manifest phenomena. Yet, ever since the beginning of time, man has intuitively sensed the existence of another world: a non-manifest world whose presence underlies – and makes endurable – the one we experience every day”.

Then goes on and enlightens us about the symbolism of an ancient Jain icon of man, Purusha, in both his human and cosmic aspects, explaining the extensions of this symbolism in the whole of the mankind as the relationship of man and his/her context. A relationship that changes constantly as we move from era to era, however, has formed and maintains basic principles of the correspondence between man and cosmos.

The Vastu Shastra that translates into “Science of Architecture” is a system of rules of design that are known to have derived from 4000 years old scripts and been incorporated in the building science with time, not necessarily in their initial form but often following each era’s and location’s traditions and demands. This system of rules is about topography, direction, environment, geography, and science and is considered to bring happiness and prosperity to the habitants of the building created following this system of rules.

The first written mention of the term Vastu is in the Rig Veda, as Vastospati (with meaning house and meaning Lord), and refers to the deity that protects the house. While the ritual that takes place until today, to worship and bless a new site of construction is called Vastu Puja. The rituals associated with architecture are also described in the later Vedas, Sutras, Purana, Tantras, Vastu Shastra. Already since the 1st century AD, Vastu had been a complete and fully developed technically, specialized science dealing with architecture. Later it was divided into two schools, the Nagara, the Dravida. However, among the several texts there is more common ground than disagreement and can be summarized in basic norms :

A new project begins with an invocation of Lord Vishvakarma, another Rigvedic deity of the creative power that holds the universe together. Then, according to the texts of Manasara and Mayamata, the architectural team is carefully chosen and always consists of the following basic roles:  Sthapati – master architect, Sutragrahin – surveyor, Takshaka – carpenter/sculptor and -expert in completing Takshaka’s work. Once the team is formed they proceed in picking up the ideal land, based on criteria of size, shape, sound, taste, color, smell, vegetation and topography. Calculations of various factors among which with and length of the chosen land as well as orientation, follow. Once all the factors are determined, comes the time to apply the Vastu Purusha Mandala, a kind of master grid for a design that indicates the form of the house. Finally, materials and definitive form of the building are decided and applied. This is a general, brief description of the basic steps for applying Vastu. As it is a vast and rich architectural tradition, a series of articles on its analysis will follow in an attempt to see it in detail as well as examine if there are any similarities to the Greek philosophy.

Mari Siampani, Architect-Engineer, Patras School of Architecture graduate, MArch “Architecture-History-Project” Roma-Tre University of Rome. She has been a laboratory associate in “Renovation of Buildings” and “Museology, Museography & Exhibition Design” Departments of the National Technical Institute of West Greece. She has collaborated with offices in Greece, Italy, India, Norway while she runs her own architectural offices (www.siampaniarchitects.com) in Patras and Athens. Member TEE and RIBA.

Articles by Mari Siampani in INDIKA