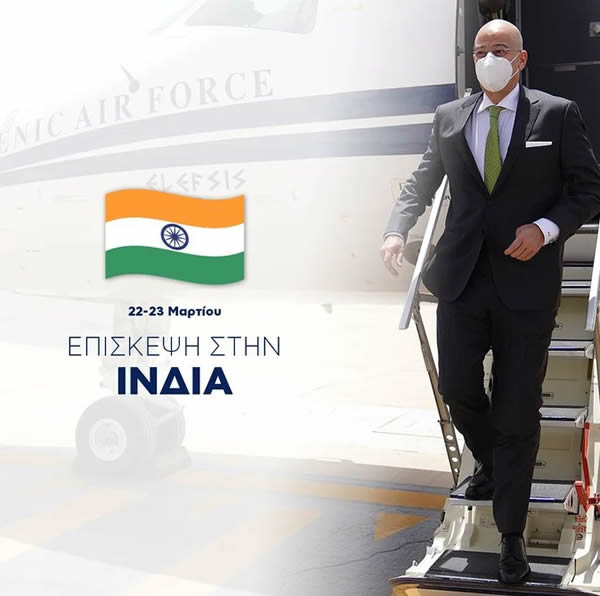 The Greek Minister of Foreign Affairs Nikos Dendias paid an official visit to India on March 22 and 23, 2022. During his visit he was received by the Vice President of India and Speaker of the Upper House, Mr. M. Venkaiah Naidu and his Indian counterpart Dr. Subrahmanyam Jaishankar.

The cordial meeting with Mr Naidu highlighted the long history of Greek-Indian friendship and discussed issues related to bilateral co-operation, including inter-parliamentary co-operation.

In his meeting with Mr. Jaishankar, which is the third in less than a year (after the meeting in Athens and Paris), Mr. Dendias expressed the ambition of the Greek government to upgrade its relationship with India and to acquire a strategic character.

Discussions between the Foreign Ministers are expected to cover a wide range of issues, Discussions between the Foreign Ministers covered a wide range of issues, such as the two countries’ common commitment to the principles of the UN Charter and to international law, in particular international law of the sea, bilateral and multilateral cooperation (India is a non-permanent member). of the UN Security Council), as well as developments in Ukraine after the Russian invasion, the Indo-Pacific, the Eastern Mediterranean, and other issues of international interest.

The two ministers also signed two Cooperation Programs between Greece and India
Statement of intention for immigration and mobility, and
Cultural and Educational Exchange Program for 2022-2026

Following the enlarged talks, joint statements were made to the press, emphasizing the common understanding and commitment to international law, safety in navigation, territorial sovereignty, human rights, and the prohibition of the use of force.

Finally, the Minister of Foreign Affairs gave a lecture at the Chair of Greek Studies “Demetrios Galanos” of Jawaharlal Nehru University (JNU), where he referred to the historical ties that connect the two countries.

Mr. Dendias’ visit to India is a continuation of Dr S. Jaishankar’s visit to Athens, on June 2021 and is expected to consolidate and further strengthen the multifaceted relationship between the two countries.