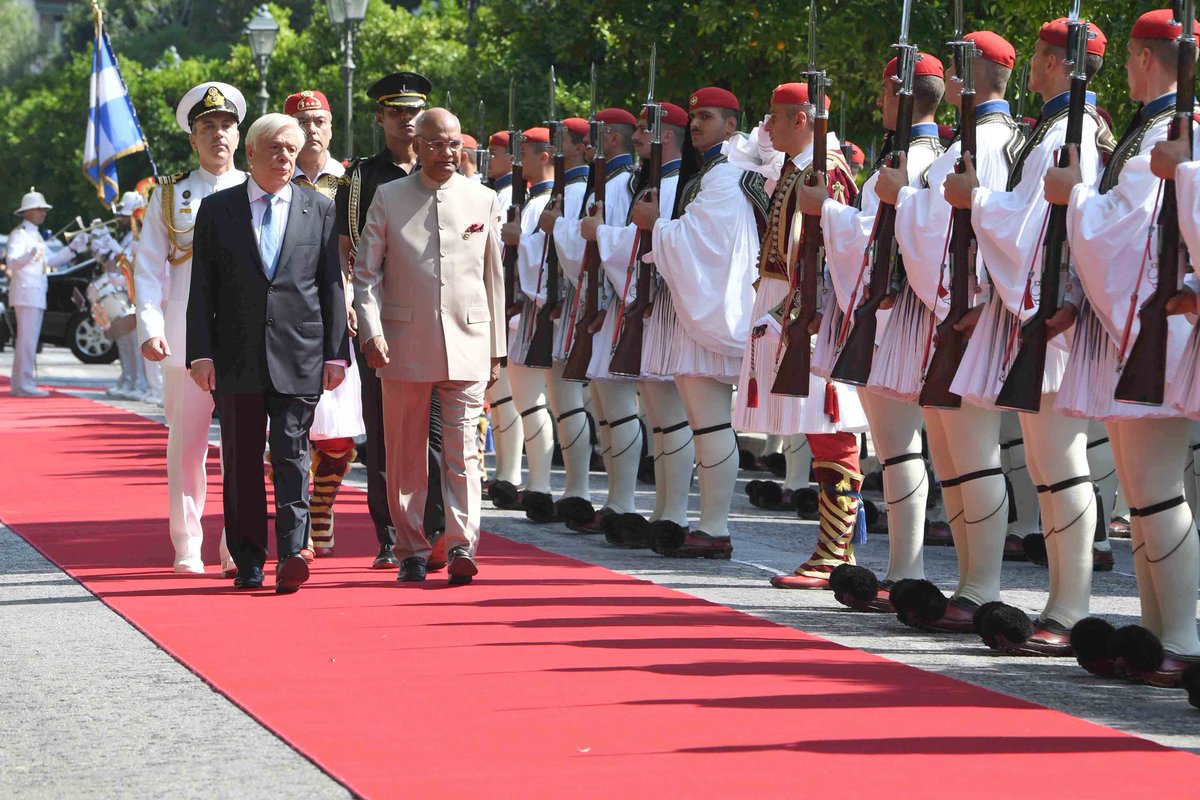 “This is my first visit to Europe since becoming President of India in July 2017. It is appropriate that the visit has brought me to Greece because geographically and historically your country has been India’s gateway to Europe.” President Kovind, Athens, 19 June 2018

The Honourable President of India Shri Ram Nath Kovind arrived in Greece on June 16, 2018, accompanied by a large mission of senior government officials and entrepreneurs.

On his arrival in Athens, the President of India twitted in Greek language the following text (translated into English): “I had a warm welcome on my arrival in Athens. India’s relations with Greece start from antiquity, from the days of Alexander and Poros. Our countries share the same values ​​of democracy, the rule of law and pluralism. I will hold talks with President Pavlopoulos of Greece. I will meet with the Managing Directors of the India-Greece Business Forum and speak at the Hellenic Foundation for European and Foreign Policy.”  On June 17, President Kovind visited the sites of historical and archaeological importance. Later, speaking to Prime Minister Alexis Tsipras, he said referring to this visit, “Ancient Greece has one of the most valuable contributions to human civilization. I had the opportunity to visit yesterday some of your ancient monuments in and around Athens. The beauty and grandeur of the Acropolis, the Panathenaic Stadium and the temples of Zeus and Poseidon are enchanting.”

In the afternoon, the President addressed the Indian community and Greek Indologists at the hotel Grande Bretagne. In his speech, the President referred to the age-old deep relations between Greece and India, making special reference to Megasthenis, who, with his book INDIKA made India known to the world. He then thanked the Greek Indologists for their interest in Indian languages, arts and culture and urged the Indian community to help enhance economic, cultural and people-to-people links between the two countries. “In addition to the government, all play an important role in improving relations between India and Greece. I believe that all Indians here in Greece are cultural ambassadors of India,” President Kobind said. Finally he referred to several ongoing initiatives of the Indian Government  that aim to connect and engage diaspora communities with their motherland; and spoke about the continuously improving position of the Indian economy. About 12,000 immigrants of Indian origin reside in Greece.

According to the official schedule, on Monday, June 18 at 10 am, the Indian President laid a wreath to the Unknown Soldier’s Monument. Then, he was welcomed by his Greek counterpart Mr. Prokopis Pavlopoulos and had delegation-level talks on economic, cultural and political issues.

During their meeting, President Kovind presented President Pavlopoulos a painting of Heliodorus Pillar, erected in 2nd century by Heliodorus who was the Ambassador of Indo-Greek King Antialcidas near Vidisha, M.P. and a bust replica of a Bodhisattva belonging to Graeco-Buddhist art of Gandhara, Kushan period, 2nd century A.D.

Afterwards, President Kovind met with Greek Prime Minister Mr. Alexis Tsipras. The two leaders discussed various issues of mutual interest and emphasised the strong relations between the two nations. Prime Minister Alexis Tsipras welcomed India’s President Ram Nath Kovind to Greece noting that he came at a critical time for the country, when it was exiting a long economic crisis and finally able to stand on its feet, as well as to play a leading role on the geopolitical scene. He also pointed out that “India is a country that plays an important role on the world stage.”

The Indian President stressed that choosing to visit Greece first during his visit to Europe reflects the long-standing friendship of the two countries and the desire to deepen ties with Greece. He also referred to the strong and long-standing historical and political relations of the two peoples that reflect the deep and mutual trust that exists between them.

“Greece and India are two ancient civilizations. Our ties date back to the time of Alexander the Great and King Poros. We have flourished exchanges in political, economic and cultural terms for centuries. We had a profound interaction in terms of ideas and philosophy. We are fortunate to have such a rich past. We must use it as we work to build and strengthen our modern ties.

My visit aims to strengthen our political and economic relations … we have excellent political relations. Both countries, historically speaking, have been sensitive to each other’s concerns. Thank you for your solidarity and your support for the Kashmir issue and we appreciate it deeply. We also express our highest support for you on the Cyprus issue. There is excellent cooperation between the two countries on a multilateral level. Let us continue the good cooperation. Thank you for your support for our candidacy for a permanent position in the United Nations Security Council. ” President Kovind said.

President Kovind also met with the Leader of the Opposition Mr. Konstantinos Mitsotakis and they discussed various aspects of India-Greece bilateral ties.

On the same day, President Kovind visited Phaleron Commonwealth War Cemetery where he paid a tribute to 74 Indian soldiers who lost their lives in the II World War in the defence of Greece and are buried there.

H.E. Mrs. Sawita Kovind, spouse of the President of India together with H.E. Mrs. Sissy Pavlopoulou, spouse of the President of the Hellenic Republic visited the premises of the Organization “The Smile of the Child”, where the Indian quest made a donation.The First Lady of India  was impressed by the wide spectrum of actions the Organization is making for the benefit of the children and thanked the Organization for the warm welcome. The children of the institution drew two beautiful canvases that they offered to the honourable guests as a gesture of honor and thanks.

In the evening the President attended  a banquet hosted by the Greek President. The dinner was attended by Prime Minister Alexis Tsipras with his wife Ms. Peristera and prominent members of the country’s political, military and economic leadership. Read the addresses of the two Presidents in the Greek language HERE

On June 19, last day of the President’s stay in Greece, Shree Kovind addressed India – Greece  Business Forum and said that there is immense potential to take India-Greece economic ties to a higher level: “India-Greece bilateral trade at US$ 530 million is way below what had been achieved in the past, and what possibly could be a reasonable target for the future. With some efforts this can easily be made to cross US$ 1 billion in the next few years.” He also urged Greek companies to look at investment and technology tie-up openings in India. “Foreign Direct Investment flows into India have risen from US$ 36 billion in 2013-14 to US$ 60 billion in 2016-17. India is set to be a 5 trillion $ economy by 2025 with the 3rd largest consumer market in the world,” he said. Read the whole address of the President HERE

Afterwards, President Kovind gave a speech to diplomats, policymakers and academics on ‘India and Europe in the Changing World‘ at Zappeion Megaron, organized by the Hellenic Foundation for European and Foreign Policy (ELIAMEP), a leading think-tank in Athens. In his speech, he refered to Alexander the Great, whom he dεscribed as “the most famous Greek to come to India”, and added “he arrived at the head of an invading army in 326 BC – but he left as a friend. Every Indian schoolchild knows of how Alexander and Porus fought a pitched battle and then became allies.” The honourable speaker praised aslo the values of liberal democracy, popular sovereignty and transparent government which continue to guide us and are cornerstones of India’s relationship with Greece and with the European Union. “Ours is a partnership of principles” he said. The full text of President Kovind’s speech is available HERE

After his speech, the President and his delegation were transferred to the international airport from where he departed for the next stop on his three nations tour, the Republic of Suriname in South America and Cuba.

Athens, June 19, 2018: President Kovind delivers a speech on “India and Europe in a Changing World” at  Zappeion Megaron Athens, June 18, 2018:  The Presidents of Greece and India with their wives and members of the Lyceum of Greek women before the official dinner at the Presidential Palace. Photo: presidency.gr Athens, June 18, 2018: Mrs. Sawita Kovind and Mts. Sissy Pavlopoulou at the organization “The Smile of the Child”. Photo: hamogelo.gr Athens, June 18, 2018: President Kovind is laying a wreath to the Indian soldier’s memorial at the Phaleron Commonwealth War Cemetery Athens, June 18, 2018:  President Kovind and President Pavlopoulos with the delegations are having discussion Athens, June 18, 2018. President Kovind paid his respects at the monument of the Unknown Soldier in Athens Athens 16 June 2018. Arrival and reception of the President of India in Greece