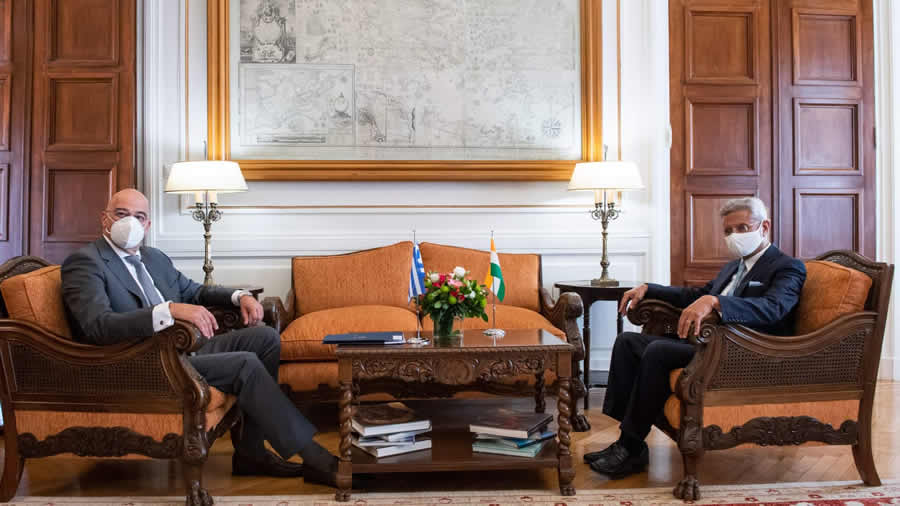 Minister of External Affairs of India Dr. Subrahmanyam Jaishankar held an official visit in Athens from 25 to 27 June 2021.

On Saturday morning Greek Prime Minister Konstantinos Mitsotakis received the Minister of External Affairs of India Dr. Subrahmanyam Jaishankar and expressed his commitment to a deeper bilateral relationship. The Indian Minister expressed his gratitude and conveyed the congratulatory wishes of Indian Prime Minister Narendra Modi on the 200th anniversary of Greek Independence. See the video HERE

The Greek and Indian Ministers of External Affairs met at the Ministry of Foreign Affairs in Athens and shared a common commitment to respect the International Law and their common will to forge new, strong ties of cooperation at all levels based on the long history of friendship that connects the two countries.

The expanded round of talks that followed between the Greek and Indian delegations focused on strengthening both bilateral and multilateral cooperation. International and regional developments in the Indian Ocean and the Eastern Mediterranean were also on the agenda.

The Greek Minister signed a framework agreement for the establishment of an International Solar Alliance in the presence of his Indian Counterpart on behalf of the Hellenic Republic. “It was a great pleasure to sign the framework agreement of the International Solar Alliance. An initiative of the Indian Prime Minister, in which more than 120 countries participate, with the prominent position of France,” said Nikos Dendias.

The Indian Minister welcomed Greece to the family of the International Solar Alliance. “It is my honor to be here, for your signature, to join the Alliance,” he told Nikos Dendias and underlined that this is our common commitment to a greener planet, a more sustainable development.

This was followed by statements of the two ministers to the press, where the bilateral discussions were characterized as productive and insightful on many regional and global issues, while agreeing to step up the pace of engagement and work towards a strategic partnership. Read the Joint Press Release HERE

In the afternoon, Dr. S. Jaishankar visited a few archaeological sites and museums in Athens and later in the evening together with Mr. Dendias he unveiled the statue of Mahatma Gandhi in a small ceremony organized by Mayor of Athens Mr. Kostas Bakoyannis in front of the Embassy of India. Read more about the unveiling of the statue HERE

The Indian Minister of External Affairs departed the following day for Italy to attend the G20 ministerial meetings.

The Minister of External Affairs of India Dr. S. Jaishankar arrived on Friday, June 25, 2021 in Athens, where he was welcomed by his Greek counterpart Nikos Dendias.

Mr. Dendias hosted a dinner in honor of the Indian guest, who thanked him for the warm welcome and wished for a productive discussion on regional and global issues, while he described Greece as an important partner in India’s broader EU engagement.

“The first exchange of visits of Foreign Ministers of the two countries in 18 years, which opens new perspectives for the consolidation and upgrading of relations between Greece and India,” Nikos Dendias wrote in a Facebook post.

Thank FM @NikosDendias for a warm welcome to Greece. A productive discussion on regional and global issues. Greece is an important partner in our broader EU engagement. Look forward to our formal talks tomorrow. pic.twitter.com/6sIRH6VFnl