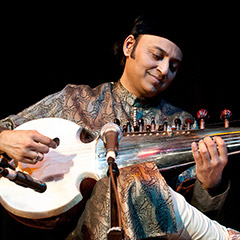 Born into a family of legendary sitar and surbahar players, Wajahat Khan started to play the sitar at the age of three at his father’s side. A child prodigy, at eight his fame as a singer had already spread beyond his homeland. As a teenager, he went against the family musical tradition and decided to dedicate his life to the sarod, one of the most popular instruments in Indian classical music.

Today, he is one of the best-known sarod players in the world. As a composer and teacher of Indian music, he does everything in his power to bring the Indian musical tradition to a wider audience. Famed for his experimentation and his encounters with jazz, Western classical music and flamenco, he has brought his own visionary innovations to the sarod, imbuing this beautiful instrument with new dimensions in the process.

His unique and ground-breaking style employs a huge range of complex classical Indian forms in his quest for emotional expression.

There will be held a pre-performance talk about Wajahat Khan (18:00-19:30). Entrance is free and on a first come, first served basis.