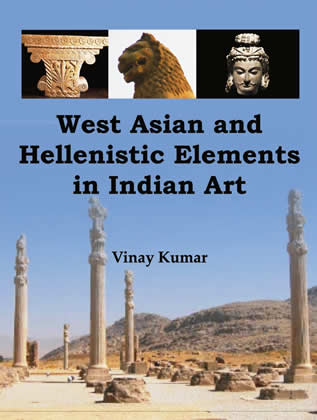 Despite the wealth of material contained in various published works and article, the study of West Asian and Greco-Roman elements in Indian art and their transformation needed a comprehensive and critical estimate and the present book is an outcome of that. The present book is an attempt by the author to find out various motifs or elements that have been taken from the art of West Asia and Greco-Roman world in Indian art and have been transformed in Indian art. There are many art motifs which are West Asian and Greco-Roman in origin but they underwent great formal changes on the soil of India and too from the very beginning as if it was deliberate, pre-planned and well thought of. These foreign motifs include the floral and faunal motifs, (honeysuckle, Acanthus, lion motifs, winged animal motifs etc.) drapery and coiffeurs, geometric motifs, architectural motifs, etc.

The contents of the book have been broadly presented in seven chapters.

Chapter 1 of the book is primarily devoted to the statement of research problem taken up for the study along with all its essential elements. The perspectives of the research work, objectives and justification of research work are the main highlights, followed by the methodology used for the purpose of research. Besides this a brief introduction about West Asian art, Greek art and Roman art has also been given in this chapter.

Chapter 2 discusses the meaning of the term transformation, its dictionary meaning and various manifestation of the term in Indian art and cites various examples in general from Indian art and form the art of other countries. This chapter also focuses about the elements of nature like flora, fauna, rivers, mountains etc. that have become an integral part of human culture and Indian thought that were transformed into various forms in art.

Chapter 3 presents a glimpse of the various West Asian and Hellenistic elements in Mauryan art and architecture. The chapter deals in detail about the art motifs of foreign origin such as honeysuckle, knops and flower, bead and reel motif, the lion, leaf and dart motifs etc. which were transformed in Mauryan art. These were gradually transformed on Mauryan pillar, in Mauryan architecture, in Mauryan terracotta and in other realms of art during the period.  Besides this, a detail study of art motif on the abacus of Sarnath Lion capital has also been done in this chapter.

Chapter 4 of the book deals about the transformation of honeysuckle/ palmette, tree of life and lion motif in Mauryan art in greater detail.

Chapter 5 deals with various fabulous animal motifs in Sunga and Kushan art of Bodhgaya, Sañchī, Bharhut, Mathurā, Gandhāra and Swat regions that have either parallels in  Sumerian, Hittite, Assyrian, Mycenean, Cretan, Trojan, Lycean, Phonecian, Achaemenid, Scythian and Greek cultures and art or have been transformed in Indian art. They have been classified into three main types: (a) Aerial or Atmospheric (Vyomcārin) which can fly, (b) Terrestrial (Bhucārin), which can walk on earth, (c) Aquatic (Jalacārin), which can swim in water. The chapter deals in detail about various categories with specific examples.

Chapter 7 is about the narratives in Gandhāra art that have stylistic affinities with Greek, Roman or Greco- Iranian images. The chapter also mentions about the Greco-Roman concept of time, space, human form and spatial depth that have been used in Gandhāra art.

Each chapter is divided into several sections. At the end, conclusions have been drawn from the results of study. Appendices are furnished at the end of the present book.

Thus, the present book is the first of its kind in this area of research and is undoubtedly a valuable contribution of the author to the study of early Indian art. It is hoped that notwithstanding the large number of existing studies on different aspects of Indian art, the current book is of value and has casted new light upon the meaning and transformation of many elements in Indian art that has the connections either with West Asia, Greek or Roman world. With a number of illustrations, figures, line drawings, a detailed bibliography and photographs this book certainly has great research value, particularly for the study of foreign elements in early Indian art. The present book would, no doubt become an important source for information and reference book for research scholars in the field of art history. Printing of text and illustrations and the overall getup of the book is excellent and is lucidly written.