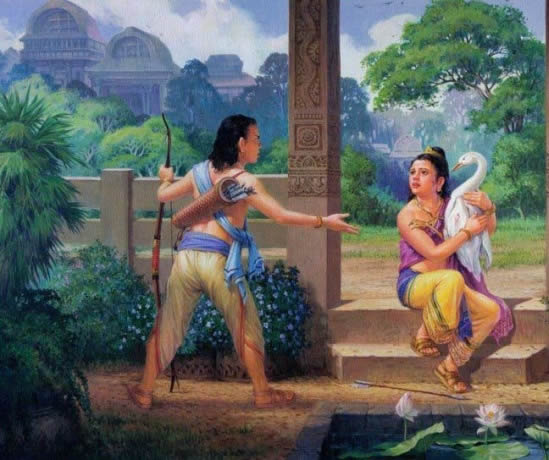 One morning the young Siddhartha and his cousin Devadatta went for a walk in the forest. Siddhartha pointed out το Devadatta a swan flying in the sky. Before Siddhartha could stop him, Devadatta shot an arrow at it.

Hit by the arrow, the bird fell to the ground and the two boys ran towards it. Siddhartha was the first to reach the spot. He picked up the bird, gently removed the arrow and nursed its wound. Just then Devadatta arrived at the spot and said “Give me the bird, it’s mine”. Siddhartha refused to let the bird go. Devadatta took his cousin to court for justice.

“I shot the arrow and brought the bird down. It belongs to me,” said Devadatta.

“I nursed its wound,” said Siddhartha.

The judge looked at the bird that Siddhartha was holding and said: “If the bird had been killed by your arrow, you could have claimed it Devadatta, but Siddhartha saved it. The bird belongs to the one who saved it and not to the one who tried to kill it “.

By then the wound had healed and the bird had fully recovered. Siddhartha came out and let the bird go. “The bird is free. It  belongs to no one,” Siddhartha said as he watched the swan fly high in the sky.