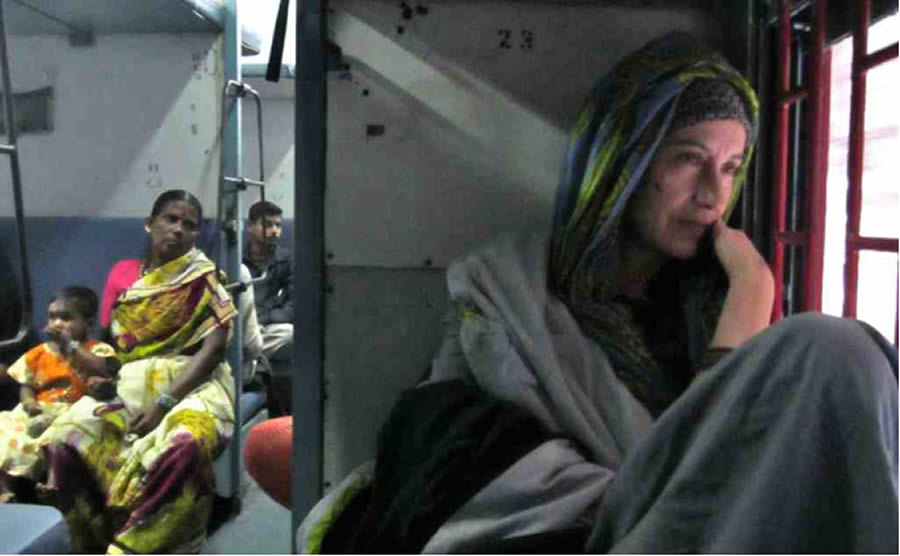 Which of the three was the answer? Cannot tell… But I liked this tricky shake of the head. Should I do the same …?

They say imitation is a way of communication. You make the other feel familiar. It is like telling him “look at me, I am like you”.

So, let me also shake my head like that, see how it works…

The lady behind the cashier starts laughing. A very good first step.

All the rest was automatically solved. Got the correct info about our train, bought our tickets, all done!

And further than that… This relaxing shaking of my back neck made me suddenly feel so playful. It brought inside a feeling of freedom, a feeling of happiness.

In terms of anatomy, the movements of our head have to do with the top cervical vertebrae of our spine.

The second vertebra from the top is the one involved to the downwards and upwards leaning of the head. It’s what we Greeks are using to express or to reinforce a positive or a negative answer.

“Yes”, is expressed by leaning the forehead downwards. It is like bowing our head to show respect, agreement, acceptance.

“No” is expressed in exactly the opposite way: Head, forehead, eyebrows, chin, they all lean up and backwards. It’s like saying… I don’t bow to you. I resist. I am negative to your approach.

A friend from England was telling me that he finds it very funny each time he sees us Greeks nodding like this. When he is in Greece he uses this head gesture himself and that’s when I find him very funny and unnatural.

Because Englishmen, like most westerners, normally turn their head right and left, when they want to say “no”.  We sometimes imitate this movement here and laugh with this extreme …Englishness.

And now comes your turn, dear Indian friends… Let’s speculate a bit on that uncertain, very polite, but also quite incomprehensible, shaking of the head that you use when you want to say “yes” or “no”.

The ideas I am about to present are totally arbitrary. They are only my own spontaneous speculations. But still, I think they are following a thin line of Logic. Aristotle, the inventor of Logical Analysis, was Greek; he is “my” philosopher…

That first vertebra at the top of our spine is named the Atlas. Atlas in Greek mythology was a giant, standing on the pick of a high mountain in Africa and holding the huge globe of the sky on his shoulders.

On the pointing bone pick of our top vertebra, named Atlas, stands the globe of our heavy cranium, filled with our brain. Anatomy shows that this Atlas vertebra is surrounded by a small empty space, which also makes it possible to our head to move in all directions.

Does this mean that our whole brain (our Mind?) is balancing on a tiny, pointing bone, floating in Vacuum?

The abstract idea of Vacuum is to be found in Buddhism.

But in our physical, material world there can be no natural vacuum. Instead, as is described in both, Indian Philosophy and the western Esoteric Tradition, there is this slightly “tangible” fifth element of Prakriti (of Nature), named the Aether.

Modern science is also leaning to a similar conclusion, through the study of the composition of magnetic fields between the earth and the moon, between the planets etc. Physical scientists claim that some very thin, almost intangible matter is always there, creating all kinds of magnetic waves. It is therefore possible to sound to be transmitted through it.

So it seems normal and of course very wise, that right in front of that “empty” space surrounding our Atlas vertebra at the top of our spine, are our phonetic chords, producing the human voice. The chakra of communication is located there.

Visshudhhi chakra is located exactly at that same spot of our body, where also the shaking movement of our head can be performed.

And this is the nod of communication used by the inhabitants of that country, where all of the above philosophical ideas were born some millenniums ago: India!

Is it a coincidence that hatha yoga, which trains the spine to remain straight for better meditation, was also born in India?

But which of the two came first?

Could it be, that this commonly used answering nod made the Indians focus their attention to the spine, which led to the invention of the yogic asanas? Or was it maybe the asana practice that made it easy to people of the Indian peninsula to shake their head like that?

Or none of the above?

This nod could very well be just an imitation of the movement of the head of a cobra.

I am sometimes checking this communication-through-imitation idea with different animals, cats, dogs, birds. I even tried it with an octopus once and it worked. That octopus kept playing happily with my toes in the shallow sea water.

When you imitate the body language or the voice of an animal, you trigger its interest and its curiosity. It may then become more friendly and playful (or it may …eat you).

Could it be that the wild (or wise) people of the faraway past millenniums were trying this neck shake, each time they were confronted to a cobra, hoping to make the dangerous reptilian not attack?

These are my thoughts, while watching the street performance of a fakir, with the cobra dancing in front of his flute.

And then consequently my mind goes also to the ancient Tantra tradition and the raising of the Kundalini techniques, also born in India.

But here I am again… I started this text intending to write something funny about the different nods of communication in different cultures and ended up writing anatomical, anthropological and philosophical speculations.

Let’s finish all this with the description of one other funny pattern of behavior, common to both of us Indians and Greeks.

Say you are lost in the streets of a city and you ask a westerner to show you the correct route to your destination. He will either show you precisely the exact way to get there, or if he doesn’t know, he will simply say, “Sorry I do not know”.

A Greek or an Indian will no way ever say something like that. He will try his best to instruct you, even if he does not have the slightest idea about the correct route.

It’s a spontaneous reaction of not wanting to disappoint the other person. We want to show that we care. Even if our wrong answer may lead the other to a totally wrong direction, we definitely want to give it.

Practically a disaster! But at the same time it’s very touching and of course also very funny! I have often experienced it myself, both as a victim, but also …as a victimizer:

“Since you were not sure, why did you tell that lady to turn left?” Stathis said to me a couple of days ago, when an elder tourist lady asked me to show her “the way to the Acropolis, please”

He was right! In my urge to make that lady happy, I lied to her, without even noticing it myself.

I could at least have answered by shaking my head a bit and thus the lady would have stepped further and found her way through the Google map application in her smart-phone.

I felt very bad inside. Angry with myself, I turned my anger against my criticizer (common behavior to us humans…) “That is why I practice yoga!” I cried. “To become more mindful and not rush give answers, when actually … I know of nothing”

Ups! It was Socrates, who had said this wise phrase: I know one thing that I know nothing.

But… am I with Socrates and Plato or with Aristotle? With Shankaracharya or with Nagarjuna…? Mind and Faith, they keep shaking inside me between materialism and the world of Ideas.

I shake my back neck to bring some balance and the choice is made: I think I will go with the Greek Sophists. They were trained to argue rhetorically and persuade others, that all three answers can simultaneously be correct: The “yes” and the “no” and the “maybe”.

This for me is the only real Wisdom in this uncertain, shaking dream-world of Maya, floating in Vacuum.

And also a kind of a … meeting “point” between the Greek Sophists (speaking too much maybe…) and the common head gesture of the Indians (much more minimal).