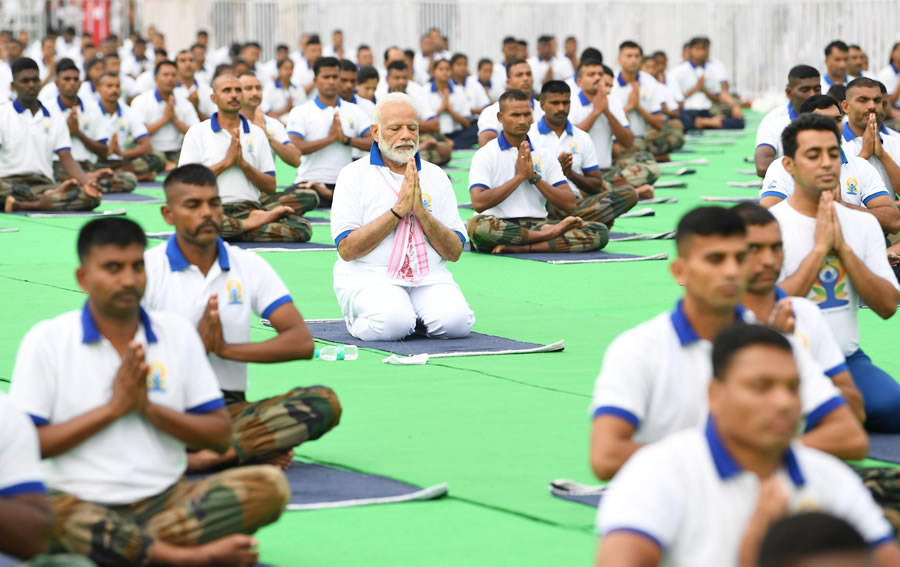 Prime Minister Narendra Modi on Friday 21 June 2019 led a mass session of exercise and meditation in Jharkhand’s capital Ranchi as millions across the country and the world celebrated the fifth edition of the International Yoga Day.

As he stressed on the importance of yoga, the Prime Minister said the physical and spiritual discipline is ancient as well modern and that for centuries its essence has remained the same of “healthy body, stable mind, and spirit of oneness.”

“Yoga is discipline, dedication, and it has to be followed throughout your life. Yoga is beyond the distinction of age, color, caste, creed, cult, rich-poor, province, frontier. Yoga belongs to everyone and everyone belongs to yoga,” he said. and stressed the universal character of yoga, by saying “We should make efforts to take yoga from cities to villages and tribal areas. Yoga is above religion, caste, color, gender, and region, it is above everything.”

June 21 was declared as the International Day of Yoga by the United Nations General Assembly on December 11, 2014. General Assembly Vice-President Álvaro Mendonca E Moura (Portugal) delivering a statement on behalf of General Assembly President Sam Kutesa (Uganda), in which he noted the overwhelming support that the resolution on yoga had received, with more than 170 co-sponsors, congratulated the Honourable Shri Narendra Modi, Prime Minister of India, for this initiative. (Read the statement HERE). The celebration of the International Day of Yoga was held for the first time on June 21, 2015, in more than 150 countries.