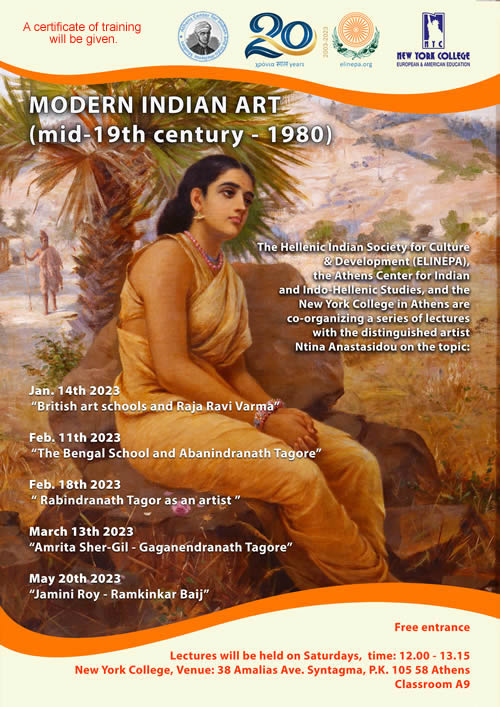 The Hellenic Indian Society for Culture & Development (ELINEPA), the Athens Center for Indian and Indo-Hellenic Studies, and the New York College in Athens are co-organizing a series of 5 lectures with the distinguished artist and art historian Ntina Anastasidou on the topic:

The lectures will be held at the Hall A9 of the New York College (38 Amalias Ave. Metro Acropolis) as per the following program:

The lectures will be held in the Greek language with slides presentation. Those who attend the entire series will be given a certificate of attendance by the Athens Center for Indian & Indo-hellenic Studies.

All lectures are free to the public.

NTINA ANASTASIADOU
Ntina Anastasiadou graduated from the sculpture department of the School of Fine Arts at the University of Athens in 1986.  In the period 1989-1991, she received a scholarship from the Government of Japan (Monbusho) and attended history of Japanese art at Kyoto University. From 1986 to 1991 she learned Japanese, calligraphy and sumi-e painting under the historian and calligrapher Mitsuo Takaoki. Her relationship with the Takaoki family – which began in 1980 and continues to this day – has been particularly important to her career as an artist.

In the period 2012 – 2014 she received a scholarship from the Government of India (I.C.C.R.) and earned her master’s degree (M.F.A.) from Rabindra Bharati University in Calcutta.

In 2021 she was awarded by the Ministry of Foreign Affairs of Japan because with her work she contributes to the mutual understanding of the cultures of Japan and Greece.  From 1/1/2023 she is President of the Greek-Japanese Association.

Under the auspices of the Embassy of Japan, she teaches sumi-e painting techniques at the Greek Children’s Art Museum in Syntagma, Athens.

She has held fifteen individual exhibitions and participated in more than thirty group exhibitions in Greece, Japan and India. Artworks of her are found in the following Museums and Collections: Sanskriti Foundation / Sanskriti Museums, New Delhi, India. India International Centre, New Delhi, India. Indian Council of Cultural Relations (I.C.C.R.), Rabindranath Tagore Center, Calcutta, India. Embassy of Japan in Greece. Embassy of the United Arab Emirates in Greece. Embassy of Greece in New Delhi, India. Museum of Asian Art in Corfu, Greece. Heraklion Museum in Athens. Collection of the Vafopouleion Cultural Center in Thessaloniki. Municipal Gallery of Thessaloniki. In the Prefecture of Thessaloniki (bust of Moses Allatini).