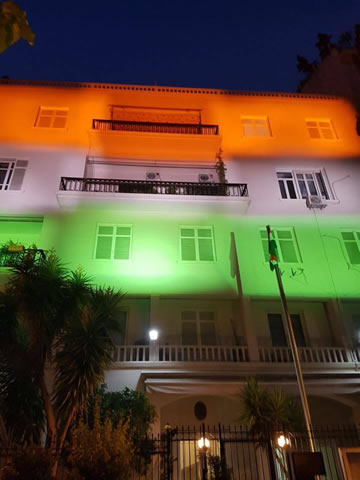 On the evening of 15 August 2017 the building of the Indian Embassy in Athens was lit with the three colors of the Indian flag marking the 71st anniversary of the country’s independence. The celebration of Independence Day began early in the morning with the flag-hostng at the Embassy’s courtyard, reading a message from India’s President Sri Ram Nath Covind, a greeting from Ambassador Murugesan Manimelai, and screening of a documentary about the struggle for independence.

Apart from the Indian Embassy staff, the celebration was attended by members of the Indian community in Athens and representatives of Greek-Indian organizations. The Hellenic-Indian Society of Culture and Development (ELINEPA) was represented by musician Kostas Kalaitzis who sang patriotic songs on the struggle for independence  and animated the audience.

The celebration ended with a musical program where Giorgos Mitsikaris played bansuri (Indian flute) and the guests enjoyed Indian dishes.

photos from the celebration