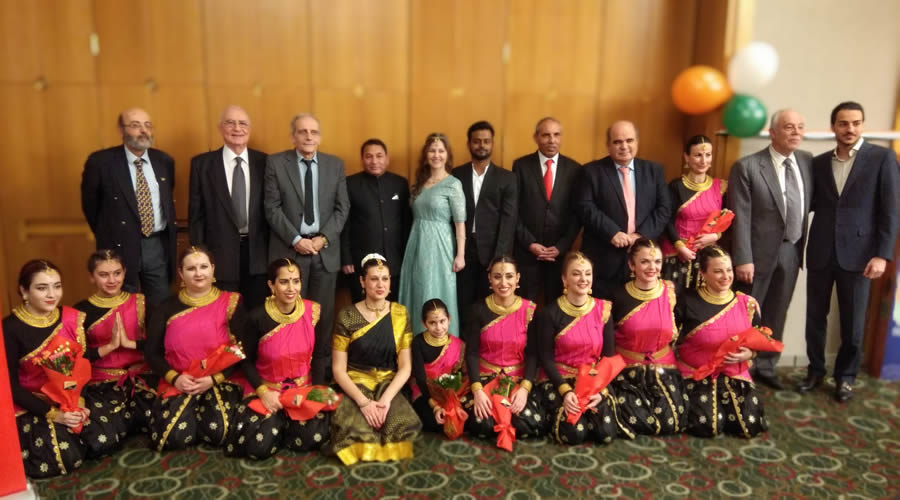 The celebration of India’s 71st Republic Day in Athens was organized on January 26th morning, with the unfurling of the Tricolour at the Embassy’s courtyard. The Charge d’ Affaires Shri Gopal Ram read out the Address by the President of India Shri Ram Nath Kovind, delivered on the eve of Republic Day of India. The celebration was attended by many members of the Indian community from various parts of Greece and representatives of Greek-Indian organizations. Patriotic songs were also sung on the occasion followed by traditional Indian refreshments.

The traditional reception took place in a central hotel of Athens, where among the guests, who honored the event with their presence, were H.E. Prof. John Chrysoulakis, Secretary-General for Greeks Abroad, Ministry of Foreign Affairs, members of the country’s political, military and ecclesiastical leadership, ambassadors of many states, representatives of Indian companies operating in Greece, and also cultural and business organizations, university professors and many other personalities.

Cover photo: The Charge d’ Affaires of the Indian Embassy in Greece Mr. Gopal Ram with the President of ELINEPA Dr Dimitrios Vassiliadis, the General Secretary of ELINEPA Mr. Antony Papadopoulos, the GIBA’s Public Relations Director Mr. James Mimikos, the teachers of Indian dance, Anna Dimitratou, Sumon Rudra, Kleoniki Karachaliou and their students, George and Christodoulos Olympios and other members of the Greek Indian Community at the Reception hosted by the Embassy of India to celebrate 71st Republic Day on January 27, 2020, at Diwani Caravel Hotel in Athens, Greece.