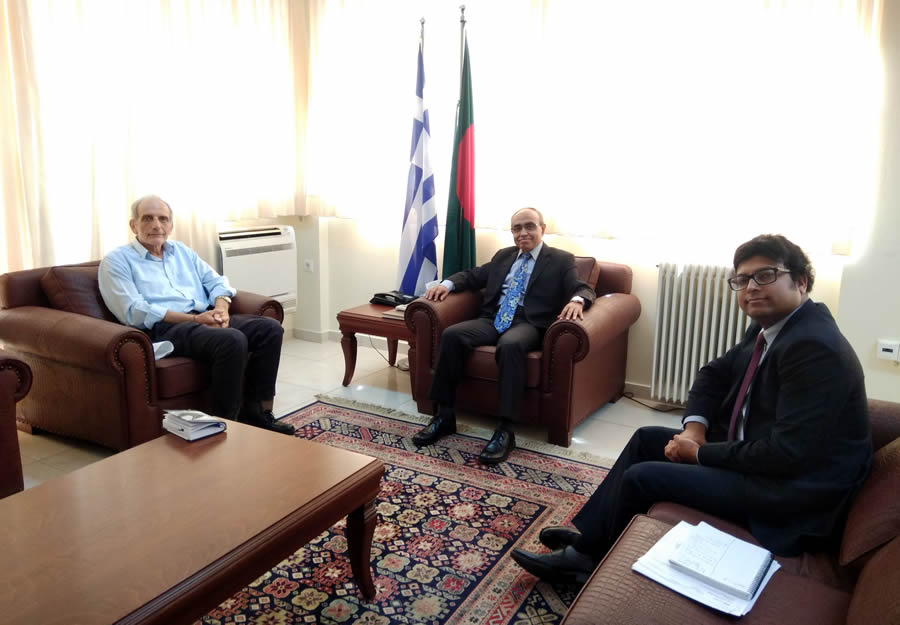 The chairman of ELINEPA and president of the Hellenic Society for Asian Studies Dr. Dimitrios Vassiliadis met today with the new Ambassador of Bangladesh to Greece H.E. Mr. Ashud Ahmed and had a very constructive discussion on the further development of the Greek-Bangladeshi cultural relations.

Among the topics discussed were the teaching of the Bengali language to Greek students via the internet; the organization together with a Greek university of a special online event to celebrate the 100th birth anniversary of the  father of the Nation of Bangladesh Bangabandhu Sheikh Mujibur Rahman; the translation in the Greek language of books and poems from the contemporary Bengali literature; and lastly the restoration and preservation of the historical monument of the Greek community that flourished in Bengal for almost three centuries and is now located in the courtyard of the University of Dhaka and which can be highlighted further as a unique symbol of the friendship of the two peoples.

Ambassador-designate Mr. Ashud Ahmed, a career diplomat, obtained his Master’s degree with Honours in International Relations from the University of Dhaka. He participated in different important trainings and seminars both at home and abroad including taking part in the Transnational Security Cooperation workshop at the Asia Pacific Centre for Security Studies (APCSS), Honolulu, Hawaii, USA in the year 2013. Prior to his appointment as Ambassador of Bangladesh to the Hellenic Republic and as non-resident Ambassador of Bangladesh to Albania and Malta, he served as Bangladesh Ambassador to the State of Qatar. He also worked as Director General of Administration, East Asia and Pacific and South-East Asia Wings at the Ministry of Foreign Affairs.

Ambassador Ashud Ahmed joined Bangladesh Civil Service Foreign Affairs Cadre in 1994. He served at different political desks at the Ministry of Foreign Affairs as well as Bangladesh Missions abroad. Ηe served as Consul General of Bangladesh in Hong Kong, Deputy Chief of Mission in Brussels, Counsellor in Colombo and First Secretary in New York. He served in the Ministry as Deputy Chief of Protocol and Director of Europe Wing and as Assistant Secretary at Protocol and International Organizations Wings.