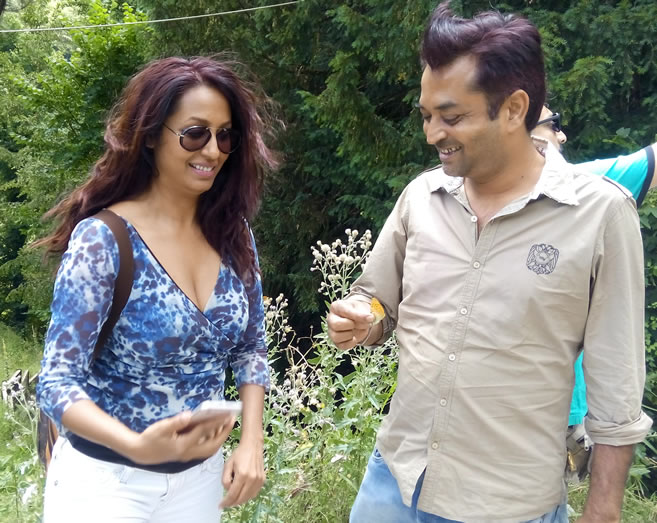 The Hellenic-Indian Society for Culture & Development (ELINEPA) invited Bollywood’s famous actress and film Director Kashmira Shah Sharma together with her production team to visit North Greece from June 30 to July 4, 2017 and choose ideal locations for her next movie.  The Indian guests welcomed at the International Airport of Thessaloniki by the President of ELINEPA Dr Dimitrios Vasiliadis, who accompanied them throughout their stay in Greece.

The Indian team visited the old town and the port of Kavala and had a panoramic view with a special cruise organized by Ms.   Iosifidou Αnastasia, President of the Kavala’s Municipal Welfare Corporation “DIMOFELEIA”, which hosted them in a luxury hotel. The visit coincided with the International Air-Sea Show, and the guests had the opportunity to watch it among thousands of other visitors.

The following day they traveled to the ancient city of Philippi, where Ms. Kashmira Shah, enthusiastic about the idyllic location and architecture of the ancient theater, said that in her films she would try to highlight the long history and art that connects the Greek and Indian people. Later the group visited the church of Lydia, where the first Christian baptism had been held; the therapeutic mud baths; the watermills and Mount Pangaio, where she was excited about the forest village of Moustheni, which she considered the ideal location for her film.

Here we have to praise the compassionate character of the Indian actress, demonstrated in an incident in the forest, when a stray dog entered the car and sat in her seat. Ms. Kashmira Shah chose to sit in the car’s rear part until the dog was transferred to a safe place and delivered to the animal welfare service.

On Friday, July 2, Ms. Kashmira Shah and her team arrived at Plaka Litohoro where they were hosted with the generous sponsorship of Mrs. Evgenia Lemonopoulou at the Litohoro Olympus Resort Villas and Spa. The following day the guests enjoyed a guided tour by Mrs. Evgenia Lemonopoulou in the old monastery of St. Dionysios, as well as in the Prionia area at an altitude of 1100 m. of Olympus, where they had lunch. They visited the Olympus Museum of Natural History and had a guided tour under the auspices of Mayor of Dion-Olympus Mr. Constantinos Dimopoulos.

In the evening, the dinner was arranged in the Litohoro Olympus Resort Villas and Spa with the live music and songs by unique Fausto. Besides the five-member team from India and Mrs.Evgenia Lemonopoulou, present were Mayor of Dion-Olympus Mr. Constantinos Dimopoulos, MP of Pieria Mr. Costas Koukodimos, President of ELINEPA Dr. Vassiliadis Dimitrios, renowned engineer Mr. Olympios George, and others.

In the interview Ms. Kashmira Shah gave to DION TV channel, expressed her excitement and admiration she and her team felt about the wonderful scenery of Olympus and the unique hospitality they received. She also spoke of her love of Greece as well as of the region’s ability to provide a high level tourist services, especially in arranging social events such as Indian weddings, and Bollywood film production.