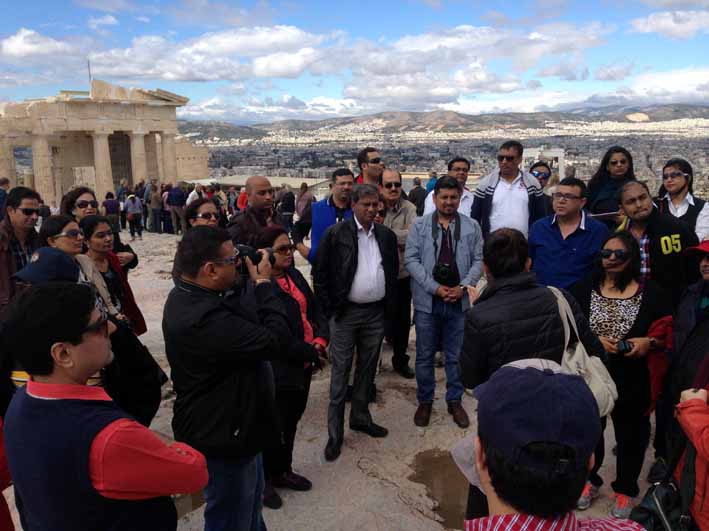 For the first time the Hellenic Association of Travel and Tourist Agencies (ΗΑΤΤΑ) invited and extended full hospitality to the members of the Outbound Tour Operators Association of India (ΟΤΟΑΙ) who came to broaden the professional collaboration and accommodate a strong demand of Indians for trips to Greece.

The invitation has become a logical outcome since the number of Indian tourists keeps increasing over the last years, moreover, Greece was acknowledged and got the First Prize as the “Favorite Destination” by the Indians who attended the OTM tourist exhibition, held in New Delhi in February 2014.

70 members of OTOAI who visited Athens and Santorini between 26 and 31 October 2014 had an opportunity to enjoy an extensive sightseeing program prepared for them of which they got the best impressions. The representatives of the Indian Tour Operators Association visited Deputy  Minister of Tourism Mrs. Angela Gerekou and discussed the possibilities of strengthening of tourist and cultural cooperation between our two countries.

On the part of India, both the Ambassador of India and representative of OTOAI Mr. Rajeev Sabharwal stated that Indians consider Greece beautiful and exceptionally hospitable and believe that two peoples have common love for culture and traditions.

Over the last years a continuously growing economy of India has created a rather strong middle class who travel abroad. In 2012 fifteen million Indian tourists traveled outside of India and the number is expected to reach fifty million in 2020.

Greece, which has long cultural relations with India over 2500 years and shares similar cultural values, has been recognized by Indian tourists as a most favorite destination and is believed to attract more tourists. Bollywood movies shot in Greece contributed to that a lot, as they made the beauty of Greek islands known to the fans of the Indian cinema in the whole world.