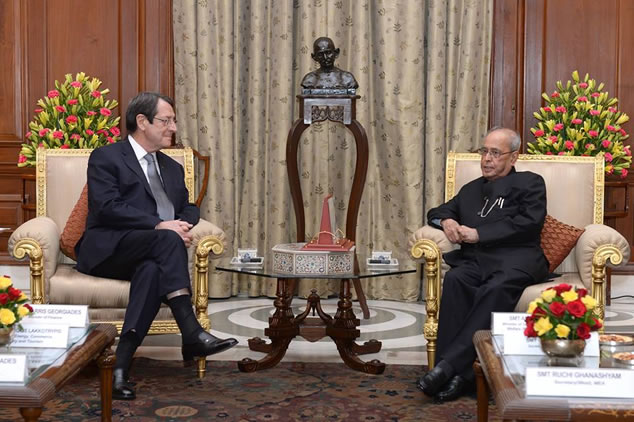 H.E. Mr Nicos Anastasiades, President of Republic of Cyprus, is visiting India on a State Visit from April 25-29, 2017, at the invitation of Hon’ble President of India Shri Pranab Mukherjee.

This is the first visit of President Anastasiades to India. Earlier he had substantive meetings with Prime Minister Shri Narendra Modi on the sidelines of the United Nations General Assembly in New York in September 2015. President Anastasiades arrived at Mumbai on 25 April. There he had a meeting with Governor of Maharashtra on 25 April and addressed a business forum on 26 April. He travelled to Delhi on 26 April. On 27 April he addressed a business forum and delivered a speech at Observer Research Foundation (ORF). On 28 April morning he was given a ceremonial guard of honour at Rashtrapati Bhavan followed by wreath laying by him at Mahatma Gandhi’s Samadhi, Raj Ghat. His other engagements on that day included a meeting with Honorable President, who hosted a banquet in the honour of President Anastasiades, and Delegation-level talks with Prime Minister Narendra Modi. He also had a meeting with External Affairs Minister Ms Sushma Swaraj. President Anastasiades left Delhi on the early morning of 29 April. India and Cyprus enjoy close, friendly and time-tested ties. On many global issues, both countries share similar views. Almost all Cypriot Presidents have come to India on State Visits. In October 2009, President Smt. Pratibha Devisingh Patil paid a State visit to Cyprus. Cyprus and India enjoy robust economic ties. Cyprus is a major investor in India. With cumulative Foreign Direct Investment of above US$ 9 billion, Cyprus is the eighth largest foreign investor in India and has invested in areas such as financial leasing, stock exchange, auto manufacture, manufacturing industries, real estate, cargo handling, construction, shipping and logistics. There is also scope for cooperation in sectors like pharmaceuticals, renewable energy, tourism and film production. Some Agreements/MoUs are currently under negotiation and will be signed during the visit.

Posted by Ministry of External Affairs, Government of India on Friday, April 28, 2017