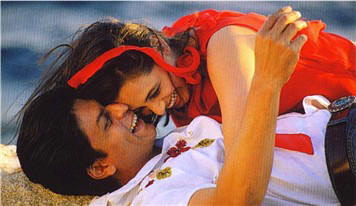 Bollywood, the Indian moviemaking industry, traces its roots to Bombay (now Mumbai) to the 1930s, and since then has been producing as many as 1,000 feature films annually in a variety of cities and scenic landscapes all over India and the world. Enormous amounts are spent in majestic environments and foreign countries for the production of the three-hour movies that offer to millions of Indians time-honoured values, cultural interchange and the chance to escape from everyday pressures. No doubt, there has been an emphasis on the major centres of Indian immigration such as London and New York, as well as the mountainous landscapes of Switzerland and the long tropical beaches of Mauritius. But recent Indian directors have begun to look to new and less familiar locations, such as Hungary, Egypt and now Greece. Going by Bollywood’s track record, we can expect to see more films set in unfamiliar locations in the future.

Chalte Chalte, which means “walking”, is an average “masala” (mix of spices) Bollywood movie, is a romantic story dealing with basic human emotions. It focuses on a theme that is gaining popularity in India recently: life after marriage. It begins promisingly enough. Middle class boy Raj (Shahrukh Khan), who runs his own truck driving company, accidentally meets fashion designer Priya (Rani Mukherjee), who was born in Greece, falls for her charms and fights against all odds, pursuing her all the way from India to Athens, to win her love. But when they eventually marry, new tensions threaten their relationship.

What makes this movie worth seeing is the presence of the two top Bollywood stars Shahrukh Khan and Rani Mukherjee in highly emotional scenes and dance. A musical dance fiesta aroundAthens University, Lycabetos Hill, the Olympic Stadium and Plaka culminates in a long romantic walk into the sunset on the picturesque island of Mykonos, as Cupid’s wound begins to heal.

Chalte Chalte, a modern romance, saw a return to mainstream popularity for Shah Rukh Khan, but it falls short of expectations and does not come close to his exceptional films Ashoka or Devdas. Rani Mukherjee is good, but we expected more, especially when compared with her previous performances in Mujhse Dosti Karogeand more so Saathiya. Nevertheless, the film is a pleasant enterprise for Shah Rukh Khan and Rani Mukherjee fans and indeed fans of modern, light-entertainment Indian cinema. Regarding the production of the movie in Greece, grateful thanks were given to Mr. Antonio’s Magos, the Honourable Consulate of Greece in Mumbai and to the former Ambassador of India to Greece, Mr. A.K. Banerjee. Not mentioned in the film, but worthy of mention here, is Mr. Maghar Gandhi, the President of the Indo-Greek Cultural Association in Piraeus, who provided constant guidance and assistance, as well as generous hospitality in his house in Salamina for all actors and the production team that visited Greece.