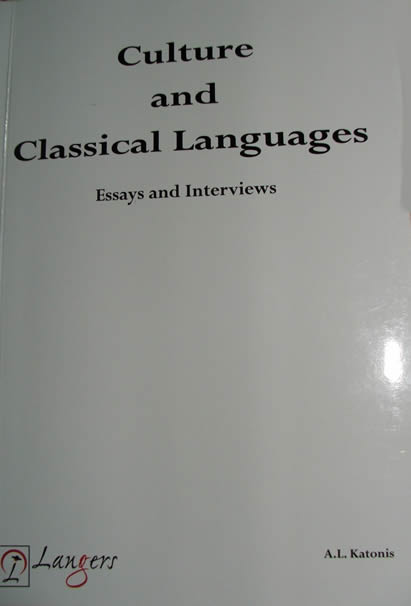 “The handy volume lures us to understand the importance of studying classical languages and cultures as beaconing lights for the future of humanity.”

In this book the author explores the Indo-Greek linguistic and cultural relations on a broad basis as important foundations for the study of classical languages and classical cultures. The book contains chapters on the cultural importance of India and Greece, a methodological suggestion in approaching classical languages in linguistic terms, teaching the classical languages and their modern continuations, the crisis of humanities in our times, contributions to Dimitrios Galanos and Georgios N. Hatzidakis, two important persons in the classical scholarship in Greece, and some personal experiences in acquiring the philological foundations of Greek and Latin and in grounding the two languages in a series of classes given in Jawaharlal Nehru University, the first institution of higher learning in India.

The area of exploration in question is relevant still in our times when we are looking for multipolar, multicultural models for understanding the world which actually the natural way of living for the people of antiquity. Andreas Katonis takes us to a journey in the area of related to historical linguistics in the above sense and in linked areas of studies.

Andreas L. Katonis is linguist, classicist, translator, teacher of foreign languages, and retired Associate Professor from the Department of the Italian Language and Philology in the Aristotelian University of Thessaloniki (Greece). He is a member of the International Society of Greek Linguistics and of ELINEPA, the Hellenic-Indian Society for Culture and Development. Born in Hungary, he graduated in Classical Philology from ELTE University (Budapest). Since 1989 he lives in Greece where he wrote his in Historical Phonology. He studied, Greek and Latin, Theoretical and Historical Linguistics, Speech Science and Comparative Philology in ELTE University, in the University of Athens and in the Freie Universität in Berlin, Germany. From 2015 till December 2018 he was Visiting Professor at the Greek Chair of the Jawaharlal Nehru University of New Delhi, India.