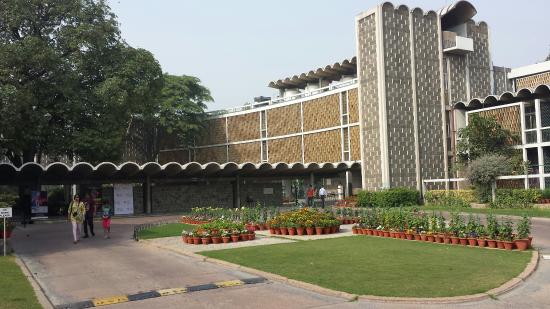 The Indian Council for Cultural Relations, the Foundation for Hellenic Culture and the Embassy of Greece, New Delhi in cooperation with the India International Center organized a Symposium “India – Greece: 2500 years of Cultural Exchanges” in New Delhi from 25th March to 2nd April, 1995.

The symposium was welcomed by a message from the Vice – President of India Mr. K.R. Narayanan who praised the long Indo-Greek history with the following words: ” Since time immemorial the interaction between these two civilizations have enriched the heritage of the two countries and the world as a whole. The extent and depth of this cultural and philosophical interaction deserves to be pursued through scholarship in our own time and the people made aware of the spiritual kinship between the Indian and Greek civilizations.”

The following day, Mr. E. Alkazi directed a performance of the Hindustani version of three ancient Greek dramas presented together as a trilogy; “Iphigenia in Aulis” by Euripides, “Agamemnon” by Aeschylus and “Electra” by Sophocles. The dramas were performed by the senior students of the Living Theatre Company in New Delhi.

On the 27th of March, Prof. Lambros Liavas, Shri Komai Kothali, and Mr. Yannis Manolidakis delivered lectures and slide projections on the ” Interaction between Greek and Indian folk music”.  The lectures were followed by an evening of recitation. Greek actress Mrs. Reni Pittaki and Indian artists and poets recited translations of the poems of Kavafis, Seferis and Elites. Mrs. Pittaki closed the evening with the performance of a monologue from ancient Greek drama.

The next day, Prof. Spyros Marketos delivered a lecture with slides on “The prophetic messages of the Hellenic (Hippocratic ) medicine at the turn of the 20th century.”  Prof. Hakim A.J. Khan gave us an elaborate description of the Yiounani medicines which originated and are based upon the principles of the Hippocratic medicines. Both the speakers decided to initiate cooperation between Greek and Indian scientists for further research in this field.

The two days that followed were filled with lectures and slide projections on the interaction between ancient Greece and India in the fields of philosophy, mythology, religion, archaeology, numismatics etc. The former ambassador to India, Mr. Velissaropoulos, spoke on the absence of any evidence that Greek and Indian Philosophies influenced each other and presented the view that both philosophies developed at the same time independently. Two eminent scholars from the Banaras Hindu University, Prof. S.S. Mishra, Head Dept. of Linguistics and Prof. K.N. Mishra, ex-head Dept. of Philosophy & Religion delivered lectures on ” Parallel linguistic development of Indo – Aryan and Greek and their mutual contact.” and ” Parallels in Indian and Greek theosophical ideas.” respectively. Prof. U.P. Arora from Bareilly University shared his remarks in most fields of interaction between the two civilizations. The late professor of numismatics B.N. Mukherjee from Calcutta University, gave the concluding remarks.

The last session was dedicated to Greek and Indian drama. Prof. Yannis Andreadis and Dr. Bharat Gupt spoke on the “Tragic creation in ancient Greece and India” and “Aristotles’ poetics and Natyasastra: similarities and differences” respectively. The lectures were followed by a round table discussion on the relation between ancient Greek and Indian theater.

During the whole program parallel events were taking place, including the screening of Greek films and exhibitions of paintings, engravings, sculptures and silk – prints by Indian and Greek artists. On the last night of the symposium an ensemble of Greek folk music presented folk songs and music from various regions of Greece. The program reached its peak with a joint presentation of songs  and music performed by Greek and Rajasthani musicians and directed by the ethnomusicolosist, Yannis Manolidakis.

The symposium was a well organized event clearly perpetuating the 2500 years of cultural relations   between the two countries and was regarded as a successful initiatory step, something which needs to be developed, expanded and built on. The attending scholars expressed interest to further initiate joint projects in the fields of  music, medicine, theater, art, philosophy, history, archaeology, linguistics, literature etc.

(First Published in “The Academy of Banaras Newsletter”, Varanasi, 1995).