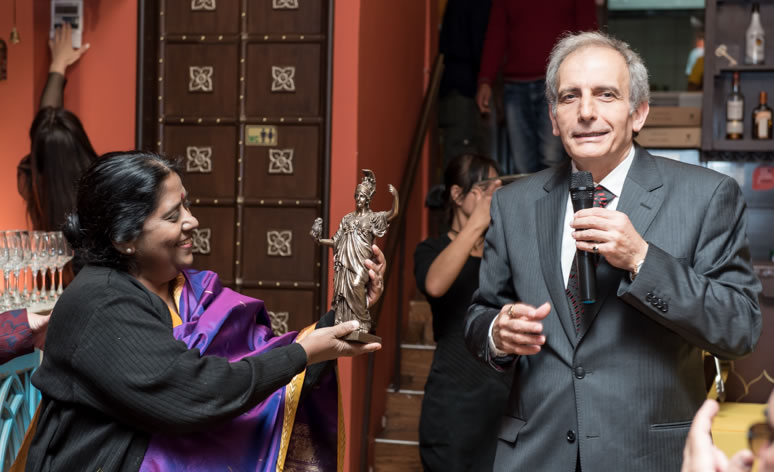 On the auspicious occasion of the Holi Festival, the Hellenic-Indian Society for Culture and Development organized its annual Indian Dinner on Sunday, March 12, 2017 at 20:00 hrs. at Indian Haveli Restaurant in Athens.

The Guest of honor, H.E. Ms. Murungesan Manimekalai, Ambassador of India to Greece, touched by the love of the Greeks to the Indian culture, gave a warm greeting  to the attendees emphasizing her special love towards Greece and its history since she began to study during her postgraduate course in India.

Representatives of the Greek Ministry of Foreign Affairs, Secretary of the Embassy of India Mr. Navin Mogan, Chairman of the Greek-Indian Association for Culture and Welfare Mr. Maghar Gandhi, renowned photographer Mrs Dimitra Stasinopoulou who presented a few of her albums,  university professors, judges and lawyers, businessmen, yoga instructors, musicians, students of Indian languages, philosophy and culture, as well as other friends of India attended the dinner.

Unfortunately, due to the limited number of seats we could not secure places for all those who responded positively to our invitation. For those who were unable to attend, the ELINEPA intends to organize another Indian dinner soon.

Vula and Tina are yoga teachers and educators, ardent students of Sanskrit and Indian Philosophy, as well as Vedic psalm enthusiasts with emphasis on correct pronunciation, articulation and rhythm. In the annual dinner of ELINEPA, they commence with a hymn to Ganeśa as the remover of obstacles (gaṇapati prārthanā), continuing with vedic hymns from the Taittirīya Upaniṣad, and concluding with a verse from the Bhagavad Gītā, 4.24, which refers to food as as a divine offering from the divine to the divine.

and Indian Classical Dance with Indian dance teacher Christina Markopoulou, founder of the center “Baraka – The Road of Dance“

As is customary in India at the beginning of the program, the team of Ms Christina Markopoulou  danced ‘pushpanjali’ – flowers offering to the supreme teacher of dance, the Nataratza Shiva. Then another dance dedicated to Shiva with choreography of Rukmini Devi will follow. That is a composition comprising a rhythmic dance and abhinaya expression.

The menu was pure vegetarian from the rich Indian cuisine