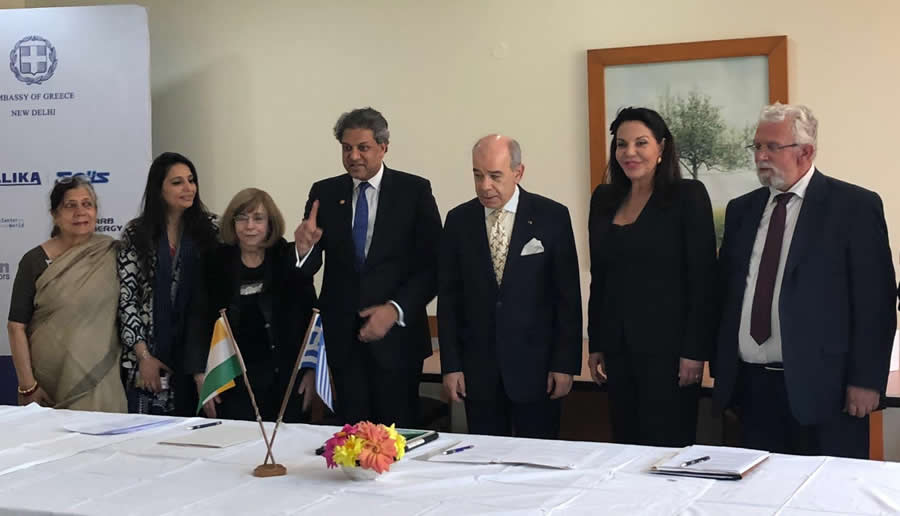 for official collaboration in Education & Culture between the  Amity University (Amity Education Group), the Greek International Centre for Sciences & Hellenic Values (chaired by Ms. Katerina Panagopoulos ) and the Foundation Monument of the Immortals (represented by the Cypriot Maestro Yiannis Hadjiloizou), was signed on March 6, 2019,  in the presence of the Ambassador Mr Panos Kalogeropoulos at the Embassy of Greece in New Delhi.

The Greek delegation visited the Amity University, Noida campus in order to explore the possible areas of collaboration and other mutual areas of interest which would prove beneficial for both the countries in the long run.

Welcoming the dignitaries, Professor (Dr.) Gurinder Singh, Group Vice-Chancellor, Amity University, said that both India and Greece share an ancient and rich history and culture that have helped them to establish their unique identities in the world. He apprised that this platform is not only going to strengthen the bond between India and Greece but also act as a gateway through which the students of India and Greece could experience each other’s cultures and traditions.

Dr. Aseem Chauhan, Additional President, RBEF and Chancellor AUH, who became an honorary citizen of the city of Amaliada, averred that this collaboration is going to help the students by giving them a global exposure.

Ms. Katerina Panagopoulos expressed her gratitude to Amity University and said that she would try to do her best for the welfare of both the countries. She exclaimed that the youngsters must be imparted good values and work culture which would help them in their future ventures.

Mr. Chris Christodoulopoulos said that India and Greece have many things in common. Our religion, nature, sciences and education exhibit remarkable similarities. He also exclaimed that he is looking forward to the collaboration that is going to take place in future expeditions.

Maestro Yiannis Hadjiloizoutalking about music, said that every country must cherish its indigenous music and cuisine, because only when we respect and value our culture, only then will the world consider our relevance.

Ms. Katerina Panagopoulos was conferred upon the Honorary Doctorate by Dr. Aseem Chauhan. Other delegates were also felicitated on the occasion.

Students and Faculties from the MBA (International Business) and BBA program were also present during the program.

Cover photo: Signing the MoU in the Embassy of Greece in New Delhi.