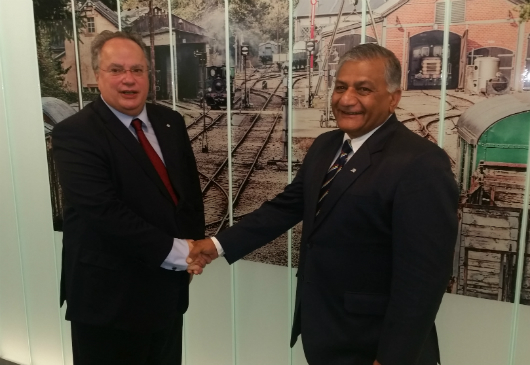 Foreign Minister Nikos Kotzias met with India’s Minister of State for External Affairs, Vijay Kumar Singh, on November 6, 2015, on the margins of the 12th ASEM Foreign Ministers’ Meeting, in Luxembourg.

The two Ministers agreed that the good level of Greek-Indian political relations creates the conditions for further enhancement of bilateral relations in the sectors of economy, trade and culture, as well as for Greece’s assistance in promoting India’s relations with the European Union. To this end, an action plan was agreed on that includes meetings of working groups of experts from the two countries to promote cooperation in the political, military, tourism and investments sectors.

Also discussed was the expansion of cooperation in the sector of cultural exchanges, and Mr. Kotzias presented the initiative he is drawing up for holding – and for examining the potential future institutionalization of – an International Conference of countries that have made a special contribution to global culture.

Mr. Kotzias also referred to the challenges Greece is facing due to the rapid increase in migration and refugee influxes, adding that the dimensions the refugee issue has taken on can be limited on if the root causes are confronted, including, mainly, the war in Syria. Mr. Kotzias stressed the need to support neighbouring countries such as Lebanon, Jordan and Egypt, and referred to Turkey’s role as a country where hotspots should be opened for checking and processing refugees and migrants. Mr. Singh acknowledged the huge pressures Greece is under due the refugee issue and expressed his congratulations to the Greek people on their stance.