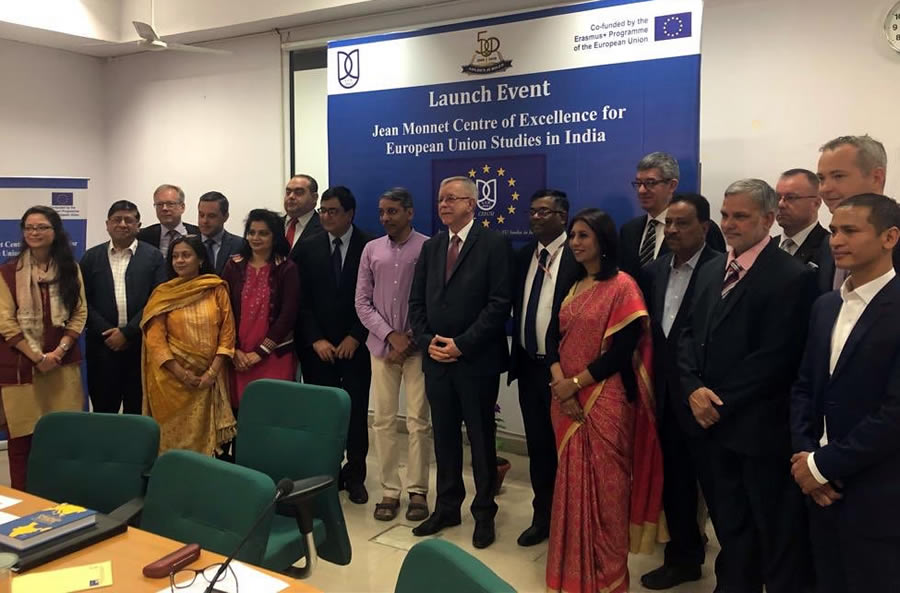 The Jean Monet Centre of Excellence for European Union Studies in India (CEEUSI) was launched on March 8, 2019, by the EU Ambassador to India Mr. Tomasz Kozlowski at Jawaharlal Nehru University, one of the top ranking Universities in India.  The aim of the Centre is to promote research, teaching and the dissemination of information on European issues in India.

Under the guidance of Prof Gulshan Sachdeva, Jean Monnet Chair, the Centre for European Studies (CES) will administrate the CEEUSI. With seven core faculty members and about sixty research scholars, the CES is a leading Centre of European studies in India. It has already received 3 Jean Monnet Chairs and a Jean Monnet Module.

The University Grants Commission of India has also recognized the CES as a leading department of Europe Area Studies. The rationale for the CEEUI is to create a much bigger platform of EU Studies in India compared to the exiting CES which broadly cover contemporary European economic, political, social and foreign policy issues. With the establishment CEEUSI network and its activities, the CES will be able to provide a wider platform to other academic scholars and institutions in promoting EU related activities in India. Many of the CES alumni are teaching in prominent Indian universities. Similarly, apart from civil services and media, some CES scholars in Europe related research activities in prominent think tanks. The CEEUSI will encourage and coordinate their EU related activities and will help the CES in further strengthening its linkages with European universities, think tanks and NGOs. Information about the three years project is available HERE

At the Jawaharlal Nehru University, there are also centers for the study of most EU countries, including the “Dimitrios Galanos” Chair for Greek Studies.