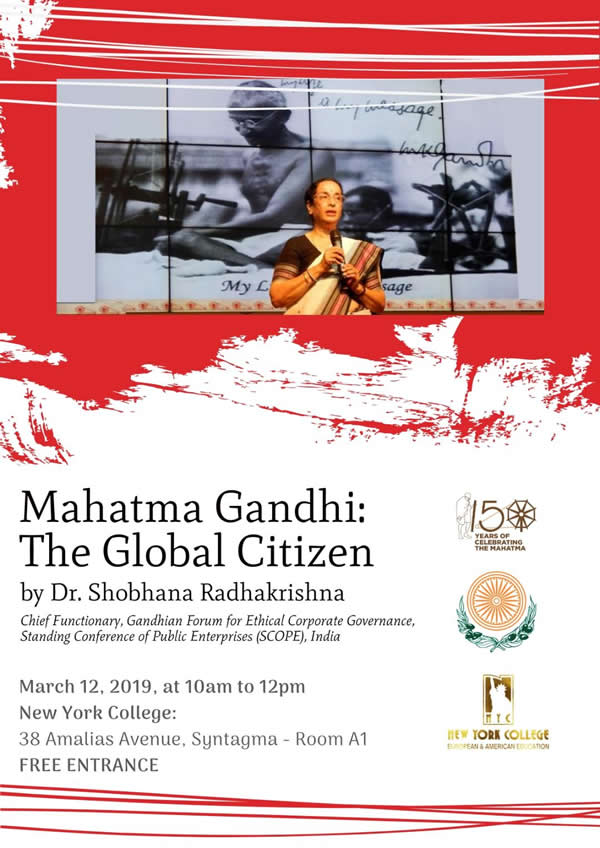 The lecture is held In line with the ongoing celebrations of the 150th birth anniversary of Mahatma Gandhi by the Government of India and is jointly organized by the Hellenic-Indian Society for Culture and Development (ELINEPA) and the New York College in Athens.

This talk in English gives an insight into the Mahatma Gandhi’s life and covers various aspects of his transformational leadership that brings about peaceful conflict resolution. In an era where the moral compass is being compromised in the name of progress and pragmatism, Mahatma Gandhi’s ethical values can serve as the role model for transformational leadership and sustainable development. His life was one of dedication and simplicity. He valued non-violence and truth as the guiding principles of his life, and therefore he is an inspiring ideal for global changes. His vision is universal, timeless and cuts across geographical boundaries.

A note about the speaker﻿

Imbibing Gandhiji’s values as she grew up in Mahatma Gandhi’s ashram (community living) situated at Sevagram in Wardha, Dr. Shobhana Radhakrishna’s focal point is the Gandhian way of life and serving humanity.

She is the Chief Functionary of the ‘Gandhian Forum for Ethical Corporate Governance’ formed under the ages of the Standing Conference of Public Enterprises (SCOPE), New Delhi for promoting ethical business practices and organizational integrity in Public Sector Enterprises.

She has traveled internationally to hold invited lectures on the transformational leadership of Mahatma Gandhi, as mentioned below:

Mahatma Gandhi’s 150th birth anniversary to be a global event – Celebrations in Greece and Cyprus, INDIKA 2018