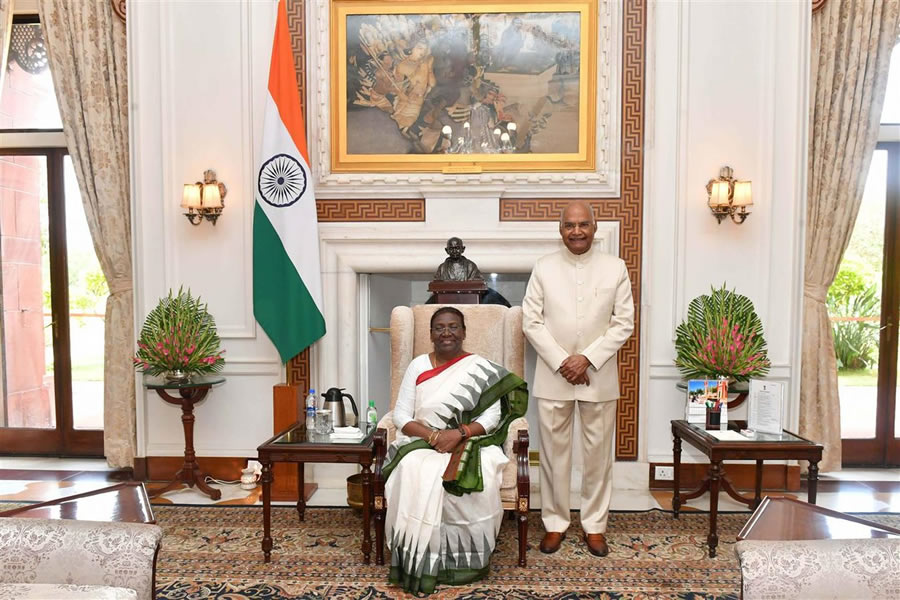 Smt. Droupadi Murmu was elected to the highest office of the President of the Republic of India on 21 July 2022 supported by the ruling BJP party and was sworn in on 25 July 2022 as the 15th President of India replacing her predecessor Shri Ram Nath Kovind. She is the second woman to hold this office, as well as the first President born after India’s Independence (August 15, 1947). Prior to her election she served as the Governor of Jharkhand State between 2015 and 2021 and held various portfolios in the Cabinet of the Government of Odisha between 2000 and 2004.

The new President was born on June 20, 1958 in Baidaposi village of Rairangpur district in the eastern state of Odisha to an indigenous tribal (Santali) family. The name given to her by her family was Puti Tudu, but she was renamed Droupadi by her teacher. Her father and grandfather were traditional village council chiefs. She married a banker in 1980 with whom she had two sons and a daughter. Her husband and two sons died in a span of 7 years, from 2009 to 2015.

Smt. Murmu is a graduate of the School of Arts at Rama Devi College for Women and a follower of the Hindu spiritual movement Brahma Kumaris.

The President of the Republic of India is indirectly elected by an electorate comprising both houses of the Parliament of India (Upper and Lower Houses) and the legislative assemblies of each state and territory of India, which are elected by the citizens. The duration of the presidential term is 5 years.