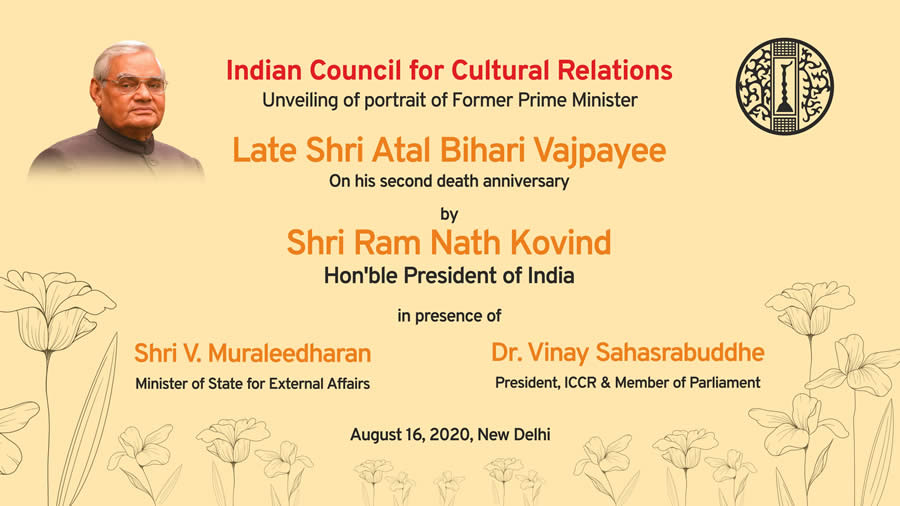 The event on 16 August will commence with the unveiling of Shri Atal Bihari Vajpayee ji’s painting by Shri Ram Nath Kovind, Hon’ble President of India in a virtual mode in the presence of Shri V. Muraleedharan, Minister of State for External Affairs and Dr. Vinay Sahasrabuddhe, President of ICCR and Member of Parliament. The painting has been created in oil-on- canvas by Shri Vasudeo Kamath, an eminent and well-known painter in Mumbai, a gold medalist who has received several awards both nationally and internationally.

Shri Atal Bihari Vajpayee served as the ex-officio President of ICCR from March 1977 to August 1979 when he was Foreign Minister in the post-Emergency Janata government. During his tenure as Foreign Minister, Vajpayee ji became the first person in 1977 to deliver a speech to the United Nations General Assembly in Hindi. It was his vision and guidance which saw ICCR further expand and propagate Indian culture worldwide. As Member of Parliament, as Minister of External Affairs and finally as Prime Minister, Shri Atal Bihari Vajpayee left a distinguishing and lasting impression on ICCR’s activities.