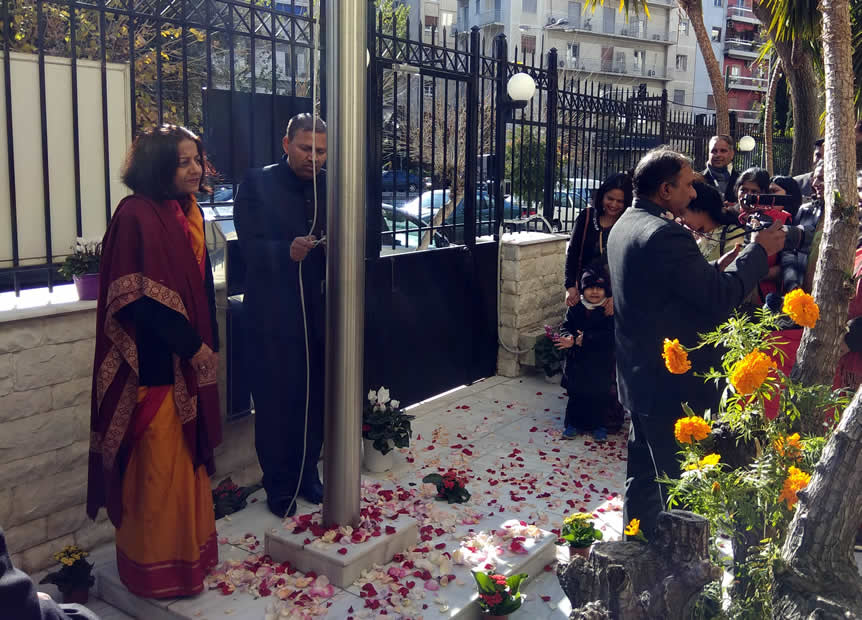 H.E. the Ambassador of India Ms. Shamma Jain unfurls the Tricolour and flowers scatter on the ground in front of a large gathering of the Indian community at the Embassy of India in Athens, Greece.

The celebration of India’s 69th Republic Day in Athens began in the morning of January 26, 2018, with the unfurling of the Tricolour at the Embassy’s courtyard and the reading of a message from India’s President Sri Ram Nath Covind in Hindi and English by Ambassador Ms. Shamma Jain. The celebration was attended by many members of the Indian community in Athens and representatives of Greek-Indian organizations.

In the afternoon of the same day, the traditional reception took place in a central hotel of Athens where among 300 guests, who honored the event with their presence, were the Deputy Foreign Minister, Mr. George Katrougalos, members of the country’s political, military and ecclesiastical leadership, ambassadors of many states, representatives of Indian companies operating in Greece, and also cultural and business organizations and many other personalities. The Hellenic-Indian Society for Culture and Development (ELINEPA) was represented by its President Dr Dimitrios Vassiliadis, General Secretary Mr. Anthony Papadopoulos and Artist Events Director Mr. Kostas Kalaitzis.