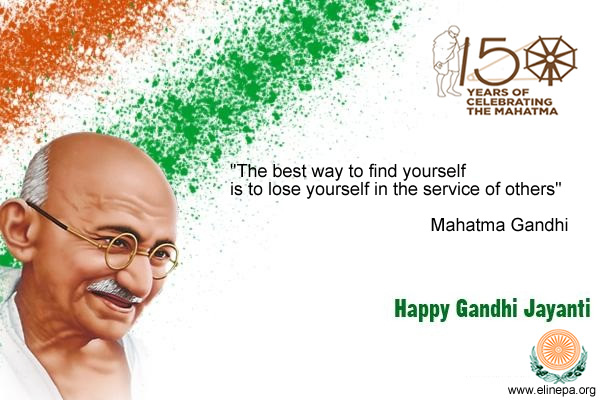 Gandhi Jayanti is an Indian festival celebrated every year on 2nd October to mark the occasion of the birthday of Mohandas Karamchand Gandhi, who is popularly known as Mahatma (great soul) due to his non-violent civil disobedience against the British colonialists in India and South Africa.

Mahatma Gandhi is remembered in India as the Father of the Nation (Rashtra-pita), he is known to have inspired several political leaders and movements for civil rights and freedom across the world. On 15 June 2007 the United Nations General Assembly voted to establish 2 October, the birthday of Mahatma Gandhi, as the International Day of Non-Violence.

Festive activities include commemorative ceremonies in government institutions and socio-political institutions. Painting and essay competitions are conducted in schools encouraging a non-violent way of life as well as emphasizing Gandhi’s contribution to the Indian independence movement. Statues of Mahatma Gandhi throughout the country are decorated with flowers and garlands, and Gandhi’s favorite bhajan (devotional song), Gandhi’s favorite song “Raghupati Raghava Raja Ram,” is usually sung in his memory everywhere.

Two locations in New Delhi play an important role in the celebrations of Mahatma Gandhi’s birthday. These are:

During a gazetted holiday, government offices, banks and post offices are closed.