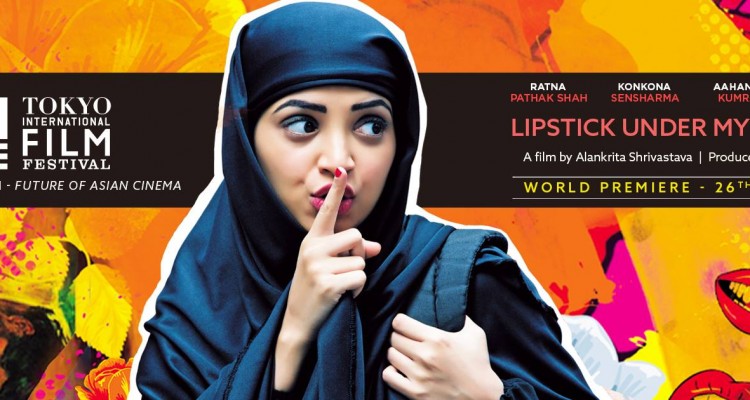 The controversial Indian movie “Lipstick Under My Burkha” of Alankrita Shrivastava (a 2016 production), will  have its nationwide premiere during the film tribute “50/50 gender and in the cinema” on 7-9 April 2017 (Friday to Sunday), at the Greek Film Archive (Iera Odos 48, metro Kerameikos) with free admission.

The film is about the double life of four women living in the Indian city of Bhopal, who are trapped in the dichotomy between tradition and modernity. The burkha is the symbol of a veil that covers their deepest sexual desires from the outside world. Their clothes and the conservative roles they follow in the everyday life are in stark contrast to the often anarchical and uncontrolled internal life.

The film invites the Indian society to recognize the female desires equally with those of men, but the question goes even further and gets wider dimensions as it provokes the religious feelings of the Muslim community. Muslim leaders have already asked the 240 million Muslim followers living in India to boycott the film, while they have initiated a litigation against producer Prakash Jha. They consider that the movie is insulting the burkha, which is a symbol of their community.

These reasons seem to have influenced the decision of the Central Board of Film Certification (CBFC) not to give permission for the film to be shown in Indian cinemas. CBFC’s decision evoked a strong reaction in the world of cinema as it limits freedom of expression. Despite its ban in India, “Lipstick Beneath The Burkha” won prizes in the Tokyo film festival and in Mumbai.

The film tribute “50/50 gender and in the cinema” is organized by the General Secretariat for Gender Equality, the Greek Film Archive, the Women in Film and Television Greece, the Embassy of Sweden and the Swedish Institute of Cinema and comprises a total of five films on which you can read details on the website of Greek Film Archive HERE. As part of the tribute a discussion on women’s representation in the cinema will be held, and the Swedish model of genders equality will be presented (Friday 7 p.m.).

See below the official trailer of the movie