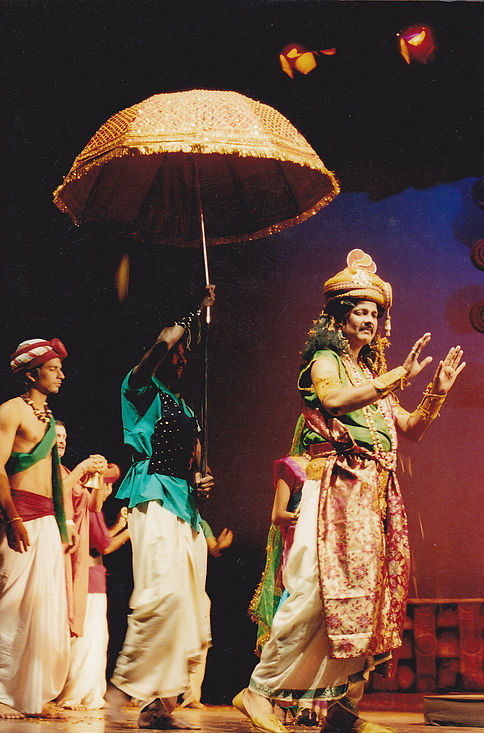 The playwright and director Daya Prakash Sinha presents his theatrical work «Rakt Abhishek» (Blood Coronation) at a time when India is faced with the dilemma of choosing between the use of violence against externally motivated terrorist incursions and maintaining the leading philosophical principle of non-violence proclaimed by the sages of the country over the centuries.

The play refers to a historical event that took place in the second century BCA during the reign of the last emperor of the Dynasty of Mauryans, Brihadratha, who had lost large areas of his  empire from the invasions of kings Demetrius and Menander, something that had failed to achieve previously their predecessors Alexander the Great and his successor Seleucus.

The author believes that the cause of the contraction of the Mauryan empire is the blind faith of  Brihadratha in the Buddhist doctrine of non-violence, something that is exploited by  King Menander. Moreover, the Greek king, who according to the Buddhist scripture  Milinda Panha embraced Buddhism and became a monk, arbitrarily is shown to work as a hypocrite who pretends to be a monk to elicit the friendship of the Indian king and consolidate his reign. In the alleged conspiracy the sister of Menander, Antonia, is also involved, with whom Brihadratha falls in love and ceases to defend his homeland. Within this setting, Pushyamitra, the general of the Indian king, decides to save the country. He murders the king and declares himself the new king. He restores the Hindu religion and persecutes the Buddhists and the intruders.

With this play, Daya Prakash Sinha is trying to highlight the suffering that can be caused by the misinterpretation of the doctrine of non-violence and to justify the use of violence when it comes to defending the homeland. To achieve the target he goes back to a distant historical fact, 22 centuries ago. He degrades the personalities of Menander and Brihadratha and with them the Buddhist theory of non-violence, while at the same time elevates the ambitious general and later King Pushyamitra by presenting Brihadratha’s murder as an act of heroism and national duty.

The theatrical performance was staged on September 14, 2016 at Indira Gandhi National Center for the Arts and other amphitheaters in New Delhi winning controversial reviews.

The play is written and directed by Shri Daya Prakash Sinha and produced by Sanskar Bharati.

Watch the whole play in Hindi below: